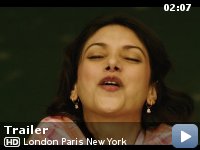 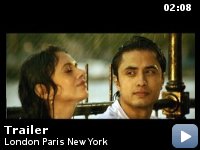 Nikhil and Lalitha are two completely different individuals who are drawn to each other in spite of their differences — or perhaps because of it. Follow their journey as they meet in London, Paris and New York for a night in each city.

Storyline
Capturing the angst of the young twenties, "London Paris New York" is the story of Nikhil and Lalitha two completely different individuals who are drawn to each other in spite of their differences or perhaps because of it. The film follows their journey of love as they meet in London, Paris and New York for a night in each city. The film is a coming of age love story mirroring 3 states of love and brings back the wit into Bollywood's romantic comedies.


This film thinks it's a whole lot smarter than it is. Trotting out the
hoary, smug idea about how small towns are stultifying and full of
stupid people is the least of its problems. Everything in it rings
utterly false. The most slowly paced, and depressing movie I have seen
this year. Every moment of almost every scene was composed of non-stop
cringing and the entire audience hiding their faces in their hands. Of
all the films I have ever seen, none has ever had a more unlikeable or
irredeemable script. This was clearly the intent and to this end the
actual acting was pretty good, but it did nothing to make the film any
more watchable.


The most annoying part is the performance of the female lead,Ali Zafar
was pretty good,but Aditi Rao Hydari ruined the chemistry.

My recommendation, in a nutshell, is don't touch this one with a barge
pole. Seriously, do not be tempted- life is short, and you'll never get
these 2 hrs back.

Oh- unless you're the sort of person who likes to laugh at stupid
jokes. If you do, maybe you'll enjoy this movie, but judging by my
fellow viewers' sighs and groans of disgust and disbelief you will be
one of few. Overall : 2/10