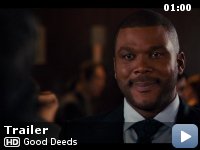 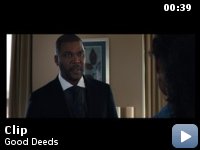 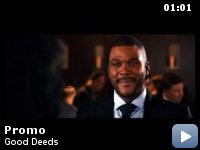 Businessman Wesley Deeds is jolted out of his scripted life when he meets Lindsey, a single mother who works on the cleaning crew in his office building.

Storyline
Businessman Wesley Deeds is jolted out of his scripted life when he meets Lindsey, a single mother who works on the cleaning crew in his office building.

Taglines:
Wesley Deeds is About to Discover the Person He Was Meant to Be.

Actresses Thandie Newton and Rebecca Romijn were born on the exact same day: 06. November 1972 – this is their first movie together.

A good story well told, but probably not for the whole family.

Tyler Perry's "Good Deeds" is the first Tyler Perry movie I have seen.
I saw the trailer when I went to see "Red Tails" in January, and I was
intrigued. I've been eagerly anticipating opening night ever since. And
talking it up until my family are sick of it.

I wasn't disappointed. But first, a word of warning. I wouldn't call
"Good Deeds" a family film. I may not take my teenage sons to see it —
although the great lessons may win out over the questionable scenes in
the end. Parents should be aware that there is significant vulgar
language, especially in the first half of the film, and that there are
both frank discussions of sexuality and a couple of rather intense
lovemaking scenes that may not be suitable for younger children. The
main character is living with his fiancée, and they are having sex
before their marriage, which some people may object to.

That said, "Good Deeds" is a great story. Wesley Deeds grew up with a
silver spoon in his mouth and has the perfect life. Only Wesley isn't
really sure it's his life, though he has buried these insecurities so
deep that he isn't really aware of them anymore. His fiancée finds him
utterly predictable. But they think they are in love, and their
families are thrilled that they are finally going to marry. Lindsey
Wakefield, on the other hand, is living in an ever-worsening nightmare.
She is barely making ends meet, and from the first moment that we see
her, it's clear just how precarious her situation is. And it just keeps
unraveling.

Lindsey works as a janitor in Wesley's corporate headquarters. They
meet when she parks in his reserved spot, and there is an altercation
involving Wesley's boorish brother. We see from the beginning that
Wesley has a good heart, but that figuring out the right thing to do
can take him some time. Wesley and Lindsey keep running into each
other, but he doesn't make a significant move to help her until the day
he witnesses her child being torn from her arms by a social worker. In
the process of helping Lindsey, Wesley not only falls in love, but
finds spontaneity and rediscovers his childhood dreams.

The story rings almost true. I'd like to believe that there is a
corporate CEO out there who would tolerate the kind of attitude that
Lindsey displays — I haven't met one yet, but maybe. And some of the
scenes are a little predictable — I saw the ending coming from the
minute Wesley told Lindsey goodbye.

But that's why "Good Deeds" is a good film and should be a successful
one. Like any fairy tale, there is just enough fantasy about it to keep
us with one foot firmly planted in reality, while the rest is realistic
enough that we can look wistfully on, thinking that it would be very
nice if things did work just that way.