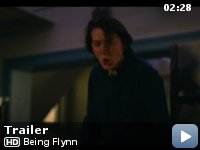 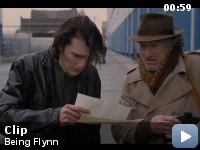 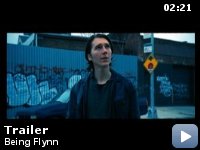 Working in a Boston homeless shelter, Nick Flynn re-encounters his father, a con man and self-proclaimed poet. Sensing trouble in his own life, Nick wrestles with the notion of reaching out yet again to his dad.

Storyline
Working in a Boston homeless shelter, Nick Flynn re-encounters his father, a con man and self-proclaimed poet. Sensing trouble in his own life, Nick wrestles with the notion of reaching out yet again to his dad.

Taglines:
We're All Works In Progress.

Memoirs of a Moron


I've lived without a father my entire life. He hasn't passed away and
isn't comatose or medically disabled. He just had no interest in being
a part of my life until I turned eighteen. Then his view on me changed,
but it was too little too late. Even when he was around the first few
years of my life, he actively showed that I didn't matter to him. That
entire experience is perhaps what helped me relate to Being Flynn the
most. While drugs or alcohol were never much of an issue, the strained
relationship between a father and son is something I understand all too
well.

Nick Flynn (Paul Dano) has always been in his father's shadow even
though he was never around. Nick's father Jonathan (Robert De Niro) is
a conman, a liar, and the self-proclaimed greatest writer in the world.
As an adult, Nick is struggling to find his place in life. His never
ending search to find a job that means something along with putting at
least some effort into becoming a writer himself is taking its toll on
him. He finally starts putting his life back on track; he finds a new
place to live, he gets a job at a homeless shelter, and even starts
dating a girl named Denise (Olivia Thirlby) who also works at the
shelter. That's when fate intervenes and Jonathan re-enters the
picture. Despite never being there for him growing up and only having
over a hundred letters written by his father to fall back on, Nick
struggles with either giving his dad one final shot or pushing him away
for good.

Paul Dano is rarely ever disappointing, but Robert De Niro has been
slipping in his most recent cinematic outings. The great thing about
Being Flynn is that this is the best De Niro performance in years. His
anger and racism towards people he doesn't understand, his delusions of
becoming a great writer and his slow downward spiral into violent
dementia are really powerful and De Niro portrays all of it
exceptionally well. Yet it's still bittersweet to see De Niro driving
away in a taxi cab in the opening scene to the film. Meanwhile Dano's
struggle with following in his father's footsteps is also fantastic in
this train wreck kind of way. Their chemistry together (or lack
thereof) is perhaps the biggest driving factor of the film.

The dual narrative was a unique touch. This is very much Nick's story,
but it's constantly jumping back and forth between his words and
Jonathan's. Hearing the same story be told simultaneously from two
different individuals was pretty fascinating. Being Flynn is a pretty
gloomy little drama sprinkled with bits of messed up comedy throughout.
The humor is dark and dry and nobody in the film is an upstanding
citizen. It's as if the film is trying to tell you that everyone has
their own demons and everyone has some messed up quality to them in
some capacity.

There's this one shot of Jonathan curling up on a grate that's blowing
warm air on a freezing night that sticks with you after the film ends.
You're eventually looking down at Jonathan; all bundled up as the
camera slowly ascends to the heavens. The scene of Nick playing catch
as a young boy with all of the boyfriends his mom had over the years
was fantastic, as well. The way the camera goes back and forth, a
different boyfriend being at the other end of the glove every time we
pan away from Nick, and finally the way Jonathan was never there to do
it himself. Mirrors are also really important as they not only cause
these characters to look inward, but both Paul Dano and Robert De Niro
have some pretty memorable scenes standing in front of a mirror.
Lastly, the violins are astounding. Rhythmic and their tendency to
start soft and get louder add this aspect to the film that wouldn't
have been accomplished with different music or none at all.

Being Flynn isn't an easy film to access, but will more than likely
touch you in some way or form if you grew up with any sort of parental
issues. With the expected strong performance from Paul Dano and the
unexpected great performance from Robert De Niro, Being Flynn allows
you to witness the troublesome times of an individual, destroy
themselves because of it, and eventually rebuild themselves for the
better. In a way, it's the most depressing self-help method to ever hit
the screen, but that's what makes it so easy to relate to and unlike
whatever you expected this film to be.