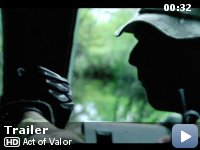 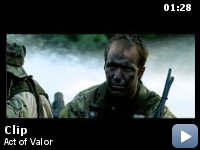 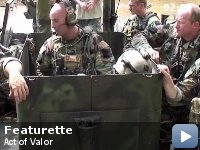 An elite team of Navy SEALs embark on a covert mission to recover a kidnapped CIA agent.

Storyline
An unprecedented blend of real-life heroism and original filmmaking, Act of Valor stars a group of active-duty Navy SEALs in a powerful story of contemporary global anti-terrorism. Inspired by true events, the film combines stunning combat sequences, up-to-the minute battlefield technology and heart-pumping emotion for the ultimate action adventure. Act of Valor takes audiences deep into the secretive world of the most elite, highly trained group of warriors in the modern world. When the rescue of a kidnapped CIA operative leads to the discovery of a deadly terrorist plot against the U.S., a team of SEALs is dispatched on a worldwide manhunt. As the valiant men of Bandito Platoon race to stop a coordinated attack that could kill and wound thousands of American civilians, they must balance their commitment to country, team and their families back home. Each time they accomplish their mission…

Taglines:
The only easy day was yesterday.

The film stars actual, active-duty US Navy SEALs and SWCC.


'Act of Valor' is an impressive movie about the cult of professional
warriors in the age of global terrorism. Directors Mouse McCoy and
Scott Waugh collaborated with the US Navy and actual Navy SEALs to give
the film a sense of battle tactics and environment on par with 'Black
Hawk Down' and 'Saving Private Ryan'. What little is lost in the SEALs'
lack of acting chops is more than made up for by honest performances
from the men who actually do this stuff for a living and the film's
gripping battle realism. The movie sidesteps an overt political point
of view, wisely focusing on the men and their mission rather than
commenting on the times in which they serve. Watch for a great scene
where Navy swift boats extract the SEALs from a Central American jungle
with an astonishing display of live fire. Plenty of battle action to
see here that you've never seen before. Highly recommended.