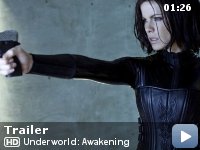 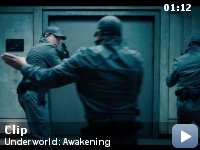 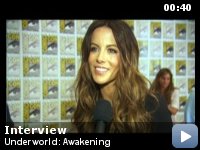 When human forces discover the existence of the Vampire and Lycan clans, a war to eradicate both species commences. The vampire warrioress Selene leads the battle against humankind.

Storyline
When human forces discover the existence of the Vampire and Lycan clans, a war to eradicate both species commences. The vampire warrioress Selene leads the battle against humankind.

Not screened in advance for critics.

Revealing mistakes:
When watching the footage of the security camera on the security monitors in the 3D version, the Time and Date stamping on the footage is in 3D. If it were in real life this would all appear as a flat 2D image on the screen.

Selene:
I was with him one day, and when I awoke it was 12 years later.


I LOVED the first three Underworld movies, but in all honesty
"Underworld: Awakening" was for me a complete disaster. The first three
movies were amazing because they made you think deeply about history,
love, hatred, war, friendship, family, and other riveting themes; they
encouraged critical thinking and connection making skills with all the
powerful flashbacks and twists and turns that were within a strong
plot-structure. But "Underworld: Awakening" failed to do any of these
things.

The plot absolutely sucked; there's nothing original, and I don't even
know what the point/theme was at all. Yes there are a few good twists
in the movie, but they happen in like the last 30 minutes, and even
here all we get to see is action and no real depth or explanation of
the who, what, where, when, why, how? of the story. If humans are now
the common enemy, then why on sam hill are vampires and werewolves
still fighting? It doesn't make sense. Near the end, just as the story
was getting good, I suddenly noticed the credits popping up. The movie
was over. I thought, "Huh? It can't be over, it was just getting
good!?" The film was also WAY too short. All of this taken together
makes "Underworld: Awakening" more like an added TV episode than a
major motion picture. I honestly can't believe 70 million was spent on
this cop out. It would have been much better if they actually showed
the fight between humans and vampires and focused on that instead of
going back to a now pointless feud between vampires and lycans.

WHAT made "Underworld: Awakening" worse was the fact that the directors
did not really connect this sequel to the other 3 Underworld movies:
where are the flashbacks? Where's the dialogue? What exactly happened
to the other characters in the earlier films, etc, etc? I know this
will disappoint all of you die-hard fans like me who love the other
movies, but truth hurts: the film was terrible.

The storyline was the worst part, I think. In the 1 hour and 30 minutes
of the film, only about 20-30 minutes is spent actually talking. Selene
only opens her mouth a few times, and nobody makes longer speeches
which made the other movies great. If the film was really about Selene
waging war against humans (which it wasn't) it would have been much
better and an interesting story, but that wasn't the true plot at all.

To the Producers: "It was the STORY that made the Underworld series a
success, not the action, but you failed to see that. Because there is
VERY little dialogue in this one and A LOT of action, there is very
little story here, which makes it very unlikely that ANYONE will
remember this movie after watching it. If you want to make another
Underworld movie, focus on the story, on speeches, on the intellect, on
actual acting instead of crappy action I can see for free on a TV
series." I hate to say this because I am such a huge fan of the series,
but "Underworld: Awakening" is utterly forgettable. I was really
disappointed, and if you're an Underworld fan you will be too. I don't
think I'll watch it a second time.

P.S. I think the people who rate this film more than a 5 either haven't
watched the other Underworld films, were paid-off, or are insane. It
just doesn't deserve anything more than a pass.