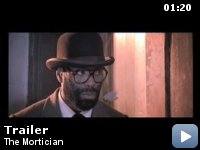 When a mortician confronts a boy hiding out in his morgue past emotions are triggered and he is determined to help the boy flee from danger killing anyone who stands in the way.

Storyline
A mortician's (Method Man) life is suddenly changed when a dead woman's body comes into his morgue jolting old memories from his past. As days go by he discovers a young boy hiding out in his morgue. When confronted the mortician learns that the boy is there to see his dead mother one last time while hiding from his father, who wants him dead. This triggers something inside the mortician and he is determined to help the boy escape from danger and is prepared to kill anyone who stands in the way.

"The plot of The Mortician has breadth and depth" "a well told story that will draw you in emotionally, pique your interest and impress upon you the power of redemption"

I recently attended a private screening of the film The Mortician in 3D
directed by Gareth Roberts of Full Circle Films, a UK company. It stars
Method Man in the lead role of the nameless Mortician, an introvert.
The Mortician made its public debut at the Berlin International Film
Festival on February 12, 2011, although not to rave reviews if you are
a reader of Variety and Obsessed With Film, an obscure website. Both
disliked the film, yet both reviews lacked any literary analysis
concerning plot, theme, structure and the use of techniques such as
flashback that assist the plot in creating and resolving the
Mortician's internal and external conflicts.

The plot of The Mortician has breadth and depth. Gareth introduces the
Mortician through a series of chance meetings, meticulous work habits
and a decaying city allowing Method Man to display his interpretation
of the introverted Mortician. Method's performance is convincing as he
dons a full beard, over-sized glasses and a bowler hat to assist his
acting skills in physically depicting the meek Mortician. His facial
expressions, soft spoken tone, and demure carriage were well placed
throughout. The sequence of events changes tempo when the corpse of a
young woman, Jenny, played by Judy Marte, is brought to the Mortician's
morgue. As the Mortician cleans her body in preparation for the autopsy
he notices a tattoo of Botticelli's Birth of Venus, which begins the
rising action – a series of flashbacks hearkening the Mortician to his
upbringing with a single mother, who unbeknownst to him as a child was
a prostitute. The use of the flashback technique was masterful (compare
it with Bordertown) as it becomes the catalyst through which the
internal conflict is developed and is ultimately resolved through and
with the external conflict.

The external conflict centers around Kane, a young boy played by Cruz
Santiago. Kane is trying to gain access to the morgue but is turned
away by the Mortician. The Mortician notices that Kane is living on the
street and being manhandled by the Mortician's assistant, Noah, played
by EJ Bonilla and is also being hunted by the local gang leader Carver,
played by Dash Mihok. Despite knowing the dangers Kane faces, the
Mortician is unable and unwilling to intervene as he goes about his
predictable introverted routine seeking interaction only with his
regular prostitute, Ava, played by Dana Fuchs. The irony here is that
the Mortician's relationship with Ava represents goodness and light
amongst the decaying and violent city. Moreover, Gareth's choice of
tastefully depicting this relationship reinforces this paradox.

The Mortician's flashbacks coupled with his awareness of Kane's plight
ultimately propel him to intercede on Kane's behalf and introduces us
to the film's main theme – redemption. The redemptive power of
reconciliation, forgiveness, and understanding are underscored through
the Mortician's metamorphosis from an apathetic android to a caring
human bringing us to the climax of the film, which has several
interesting twists and turns.

It is likely the 3D aspect probably boosted the funding of the film,
but its value will probably be lost on a generation whose only
association with 3D has been animation or action films, not drama.
While The Mortician does have some significant action scenes, it is not
enough to appease the expectation of 3D audiences. With that said,
however, the use of 3D in this film did work quite well in bringing the
setting to life and in the emotional close ups of the characters. The
Mortician is a well told story that will draw you in emotionally, pique
your interest and impress upon you the power of redemption.