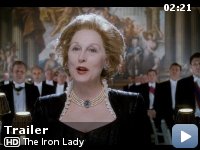 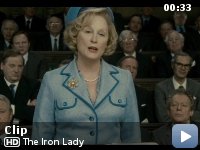 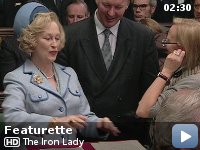 A look at the life of Margaret Thatcher, the former Prime Minister of the United Kingdom, with a focus on the price she paid for power.

Storyline
Tells the story of a woman who smashed through the barriers of gender and class to be heard in a male-dominated world. The story concerns power and the price that is paid for power, and is a surprising and insightful portrait of an extraordinary and complex woman.

On the nightstand early in the film in Thatcher's apartment is a book on Bismarck, who was known as the 'Iron Chancellor'.

Factual errors:
The composer's name of "Norma", the opera Margaret and Denis watch in theatre and whose aria "Casta Diva" is widely used in the movie score, is 'Vincenzo Bellini' (cv) not Francesco Bellini as it is shown on the booklet framed.

Alexander Haig:
Let's face it. The Falkland islands are thousands of miles away; not many of your people there; of no social or economic importance…

Meryl Streep gives a spectacular performance in a flawed, but great biopic


Before viewing, "The Iron Lady", I didn't really know much about
Margaret Thatcher. Other than she was the prime minister of England for
11 years, she was a very controversial figure and still is to this day.
So I was really interested to see the film and I decided to visit the
WGA screening.


Now let me begin by saying, Meryl Streep embodies Margaret Thatcher.
She doesn't just look like her, but she talks like her, her facial
expressions are spot on. Meryl Streep becomes Margaret Thatcher. I
would be shocked if she doesn't win an Oscar for this performance. The
supporting cast is good too, Jim Broadbent gives an excellent
performance, everyone is just great.

However aside from the top notch acting, the movie had a few flaws. The
story was uninteresting at times, the flashback scenes were a bit
muddled and a little confusing. The movie felt a little too safe, it
tried too hard, not to be controversial. Although I don't entirely
blame the film itself for that. Margaret Thatcher was such a decisive
person, that whichever side the film picked, it would be criticized by
a lot of people. I guess the film ultimately achieved the goal.

I also liked the movie didn't dwell too much on the politics, but on
the character of Margaret Thatcher. We see the human side of The Iron
Lady herself, beyond all the partisan politics and rumors, we get to
see a very personal and sad side of her. The subplot focusing on
Thacther's grief over her husband's death, as the older version battles
with hallucinations and an unwillingness to let go of her dear Denis
are heartbreaking.

Overall the movie was really well done, but just shy of greatness.
Meryl Streep's performance and the supporting cast, truly elevates the
film into a great biopic. Although I wished a little more time was
spent on focusing on her political life, the movie successfully showed
a deep and moving side of the prime minister. Which a lot of biopics
fail to do. Whatever your opinions might be on Margaret Thatcher, don't
fault the movie because of the opinion. And I highly respect Phyllida
LLoyd, Meryl Streep, Abi Morgan and others for trying to portray such a
decisive and highly controversial figure.