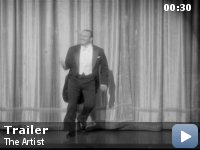 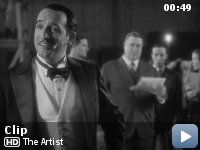 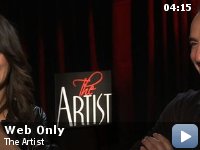 Hollywood, 1927: As silent movie star George Valentin wonders if the arrival of talking pictures will cause him to fade into oblivion, he sparks with Peppy Miller, a young dancer set for a big break.

Storyline
Outside a movie premiere, enthusiastic fan Peppy Miller literally bumps into the swashbuckling hero of the silent film, George Valentin. The star reacts graciously and Peppy plants a kiss on his cheek as they are surrounded by photographers. The headlines demand: "Who's That Girl?" and Peppy is inspired to audition for a dancing bit-part at the studio. However as Peppy slowly rises through the industry, the introduction of talking-pictures turns Valentin's world upside-down.

This film was one of a number of movies that were in competition at the 2012 Academy Awards that was related to France and French culture in some way. The films included
The Artist,
Hugo,
Midnight in Paris,
The Adventures of Tintin,
Puss in Boots from the French fairy-tale by Charles Perrault,
Rise of the Planet of the Apes based on the novel by Pierre Boulle and
A Cat in Paris. Interestingly though, there was no French film nominated for the Best Foreign Film Academy Award (Oscar) in 2012.

Continuity:
In the scene when George removes a white sheet from the things that Peppy bought at auction, in one moment the sheet is in his right hand and in the next frame it's in his left hand.

George Valentin:
So are millions of us.

Marvellous; one of the best movie experiences you'll ever have


The Artist arrived at the Toronto International Film Festival preceded
by the accolades it received at Cannes, so expectations were high, but
those expectations have been more than amply fulfilled. This film is an
absolute marvel – charming, witty, surprising, moving, clever and
beautiful. Filmmaking is about decisions, thousands and thousands of
them, and everyone involved in The Artist makes every decision to
perfection. The cinematography is ravishing in luminous black and
white. The musical score, on which the film, being silent, is so
dependant, is subtle when it needs to be subtle, dramatic when the
occasion calls for it, and never overbearing or overwrought. The
screenplay (yes, silent films do have screenplays) toys with the
conventions of the silent era, paying homage to some of the greatest
films of the first two or three decades of cinema history. The acting
is flawless, extracting emotion and humour from a simple but classic
storyline. The direction displays such self-assurance, and treats the
audience with such respect, that it is almost like having a dialogue
with the director.


The Artist is one of the most enjoyable movie experiences I have ever
had. It deserves a wide audience and all sorts of awards. I can hardly
wait to see it again.

And oh yes, if there is ever an Oscar for best animal performance, the
dog in The Artist should receive a lifetime achievement award for this
role alone.