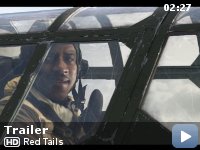 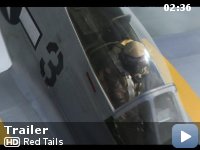 A crew of African American pilots in the Tuskegee training program, having faced segregation while kept mostly on the ground during World War II, are called into duty under the guidance of Col. A.J. Bullard.

Storyline
A crew of African American pilots in the Tuskegee training program, having faced segregation while kept mostly on the ground during World War II, are called into duty under the guidance of Col. A.J. Bullard.

Cuba Gooding Jr. is not new to the subject of the film. He has previously been in
The Tuskegee Airmen.

Continuity:
In the closing scene when Sofia is walking with her groceries, the wings she is wearing change from the left to the right side.

The Tuskegee Airmen deserved better than this tripe! Their story is a
marvelous one but Lucas has ham fisted it into a caricature. I am
extremely disappointed by this film. I hope someday Hollywood will
finally realize that truth is often…… more entertaining than
fiction, particularly when it comes to aviation and history.

These men were HIGHLY educated, technically astute, and physically fit.
The USAAC/USAAF was doing everything in its power to disqualify black
applicants for flying assignments by setting standards for them that
were ridiculously high. The plan backfired, resulting in a Fighter
Group composed of truly exceptional men. Yet NONE of this is conveyed
in "Red Tails". We have an insubordinate hot shot, an alcoholic, a guy
who likes to eat his pipe, and a mush mouth who just tells jokes.

It would have been nice to see a Tom Hanks, Steven Spielberg, or Clint
Eastwood treatment on the topic. Maybe an interview with fighter ace
Lee Archer and a few other Red Tails, then a flashback to the TRUE
story, not this one dimensional nonsense.

A waste of some talented actors (and, my God, Terrence Howard was
horrendous in this film) and special effects work (although some of the
aerial choreography completely defied the laws of physics). The
dialogue, particularly during the combat scenes is some of the worst
I've ever heard. Also, the German "villain" is nothing like the
Luftwaffe fighter pilots of World War II. These men were, as a whole,
chivalrous and honorable, not to mention highly skilled and served for
love of country, not for the fanatics who ran their government. The
enemy in this film seems more like the Nazi/Hydra bad guy from "Captain
America: The First Avenger" or something. Gag.

The acting is wooden, the writing atrocious, and the scenes disjointed.
There is simply no cogent, coherent narrative here. It is basically a
film about dogfights with shallow "drama" piecing them together. This
film could have been so much better, but alas, George Lucas can't see
the forest for the trees and squanders an opportunity to make a truly
moving, memorable film that honors these men the way they should be
honored.