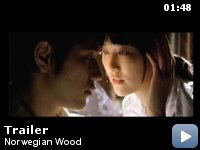 Toru recalls his life in the 1960s, when his friend Kizuki killed himself and he grew close to Naoko, Kizuki's girlfriend, and another woman, the outgoing, lively Midori.

Storyline
Upon hearing the song "Norwegian Wood," Toru (Matsuyama) remembers back to his life in the 1960s, when his friend Kizuki killed himself and he grew close to Naoko, Kizuki's girlfriend. As the two try, in very different ways, to contend with their grief, Toru forms a bond with another woman, Midori.


When I was a university student, one of my close friends told me that
novels by Haruki Murakami were good, and recommended me to read them. I
was 19 years old then, and it was the first time for me to read
"Norwegian Wood." The novel captured my interest, and I have read it
again and again since then, and I still read it even now. "Norwegian
Wood" is one of my favorite books.

The novel "Norwegian Wood" depicts the university days of the main
character, Watanabe Tohru. In the novel, he lives in Tokyo, and goes to
university. He likes reading American modern literature. He did not
have any friends except for one best friend during his high school
days, but the friend killed himself at the age of seventeen. Watanabe
has several relationships with women between the age of 18 and 21. Some
characters in the novel, other than Watanabe's best friend, have also
killed themselves. The novel consists of sex, death, literature, and
intelligence.

I went to university, and had some close female friends. In addition, I
liked reading classic literature. Furthermore, I did not belong to a
sport clubs at university, so the scope of my friendship was limited.
In essence, I felt a sense of intimacy with Watanabe while reading the
novel. (In fact, I learnt "The Catcher in the Rye" by J. D. Salinger
and "The Great Gatsby" by F. Scott Fitzgerald from Norwegian Wood, and
both books were the first English novels which I completed reading in
their original language.) Norwegian Wood is an important book for me,
so I was glad to hear, 2 to 3 years ago, that the movie version of this
novel would be screened. The movie was released about one week ago, and
I went to see it today.

Locations shot in the movie were beautiful, and the music sounds good.
In particular, I was moved by one scene in which Reiko sang "Norwegian
Wood" by the Beatles with a guitar, and Naoko lost her mental stability
during Reiko's performance. In addition, the cast members in the movie
were also good, especially Mizuhara Kiko, who played Midori, was very
cute and vivid.

Since I have read the novel over and over, and remember the whole story
in detail, I can go so far as to say that I do not need any explanation
for the story in the movie. Because I know the story, I was purely
interested in how the film director, Tran Anh Hung, had expressed the
novel through the media of a movie.

The movie version of "Norwegian Wood" was not solely a converted
version of the novel, but represented its originality and creativity
with the help of movie techniques, such as music, voice (cry, laugh, or
angry), facial expression, and scenery.

However, it is certain that those who have never read the novel will
not enjoy the movie.

(The above comment is forwarded from my blog at
http://metropolitantokyo.blogspot.com/)