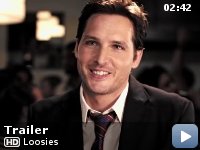 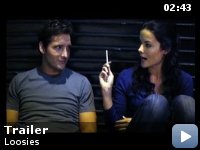 A young pickpocket in the New York subways, living a fast, free, lifestyle is confronted by a woman with whom he had a one night affair.

Storyline
A young pickpocket in the New York subways, living a fast, free, lifestyle is confronted by a woman whom he had a one night affair with, she informs him that she is now pregnant with his child, he must now choose between continuing the lifestyle he lead or take responsibility for his actions.

Taglines:
Love is not a crime.

LOOSIES is surprisingly entertaining, I emphasize 'surprisingly'
because the trailer didn't look appealing, there's nothing too creative
about the direction or the performances either and the plot is pretty
simple but overall it's a cute little rom-com written by Peter
Facinelli who many of you Twi-hards recognize as Dr. Carlisle Cullen
from The Twilight Saga franchise…


Who knew that Facinelli had it in him, this is after all his feature
screen writing debut. I'm a big fan of his role in the series Nurse
Jackie, I think he's got excellent comic timing. I've met Facinelli in
person and I could tell that he's got more to offer than just being
easy on the eyes and LOOSIES is not a bad start. In this film, he stars
as a young pickpocket without a purpose, suddenly facing a dilemma that
he couldn't see coming a mile away. The ever so cute Jaimie Alexander,
who kicked ass as Sif in Thor, plays Lucy the girl whom with
Facinelli's character, Bobby, had a one night stand. All of a sudden,
Bobby's life gets even more complicated, way more than he'd like it to
be. And the only person Bobby often turns to for advice is the same
person who forces him to pickpocket day in and day out, it's a messed
up friendship that has its expiration date. LOOSIES got a bit of
gangster situation, it's got a bit of incompetent short-tempered cop
situation, it's got a bit of a con man hilarity, the dialogue and the
plot are very formulaic but the film is so not that heavy, you wouldn't
mind the fact that the film hides in it being decent, no more no less.
It's fun to see some of yesterday's big shots like Michael Madsen,
William Forsythe, and Joe Pantoliano with something to do. For what
it's worth, LOOSIES a well-structured script, I enjoy how Facinelli
builds up and plays with the trust and the mistrust between Bobby and
Lucy, that it's not easy to see the good in people who do shady things
for a living but it's possible. LOOSIES has a straight to DVD quality
to it but it's one movie I wouldn't mind watching more than once.