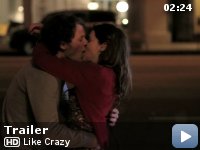 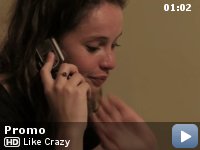 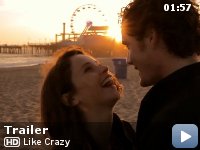 A British college student falls for an American student, only to be separated from him when she's banned from the U.S. after overstaying her visa.

Storyline
Anna and Jacob fall instantly in love when they meet as students at an L.A. university. But Anna is British and when graduation approaches, Anna decides to stay and violate her student visa rather than returning to England. After a visit home, she is then unable to return to the United States. While fighting customs and immigration battles, Anna and Jacob must decide if their relationship is worth the distance and the hardship.

Writers Drake Doremus and Ben York Jones looked back at some of the long distance relationships they had been in for the inspiration of this film.

Errors in geography:
A few scenes are set in an apartment in the UK. However, an American light switch is seen, and an iPhone using the AT&T network, revealing that the scene was actually shot in the US.

A Heartfelt and Absorbing Love Story


Just saw it at the Sundance Film Festival here in Park City, Utah.'Like
Crazy' is a love story about the ups and the downs, the euphoria, the
heartache, and the sacrifices. For those who don't know the plot,
basically a British student, Anna, falls for Jacob, an American
student. They fall for each other right away, and spend the summer
together. However, she violates the stay of her student visa, and when
she tries to return to L.A., she is denied. Thus, our two lovers are
separated by distance and multiple levels of bureaucracy that prove to
be most unfair. Can they make it work, and should they? Some have
compared it to '500 Days of Summer,' and there are a few similarities.
The major difference is the lack of any unique narrative devices and
that it is, in fact, a love story. First and foremost, let me say that
Felicity Jones as Anna is a revelation. She owns the screen and was
utterly charming and devastatingly beautiful. There's a scene in the
first 10 minutes after they spend their first evening together, and
they sit on her bed, and a sense of tension but young awkwardness that
fills the room. When the conversation falters out, she gives him a look
that was filled with such delicate longing; fueled by the power of
young love and the possibilities before them. It was in this moment
that Anna, and Felicity, won me over. The chemistry between her and her
co-star Anton was realistic and powerful. Much of the film was
improvised; the director said he would often leave the camera rolling
for twenty to thirty minutes at a time just to capture them together.
It shows. I felt myself hoping and wishing for them to work it all out,
to end up together.


The music is fantastic. It provides the heartbeat to the film and is a
wonderful compliment. It's well edited – the film ultimately takes
place over what seems to be a couple of years. Unlike early versions of
the film, title cards have been removed and a series of jump cuts
progresses the time. You have to pay close attention at times to have a
firm grasp on the passage of time. There are moments when they are
happy and together that are so iconic. Walking the streets of London,
at times they looked like the cover of a Bob Dylan cover. Quick cuts of
them together whether in LA or London are quite beautiful.

This film was obviously made based on real experiences, and the
filmmakers admitted that it was the combination of many of their
experiences. It's a realistic film. Things aren't easy. You will smile
and laugh and other times feel just as much despair as our characters.
There are no easy answers in this film, and your ultimate
interpretation and perhaps enjoyment of the film depends on what you
bring to the table, and your feelings on love, and just how much you
believe in it. This film should make Felicity Jones a star in the way
that 'An Education' benefited Carey Mulligan.

TagsEngland LA London US
A Serbian Film
The Sleeper