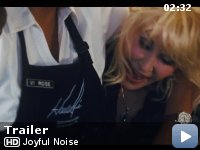 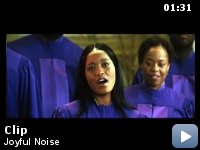 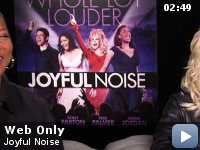 G.G. Sparrow faces off with her choir's newly appointed director, Vi Rose Hill, over the group's direction as they head into a national competition.

Storyline
"Joyful Noise" is the story of a small town choir out to win a national competition despite overwhelming odds. A story of faith and determination by the choir leaders (Queen Latifah and Dolly Parton) and the young talent who give their all to win God's praise and beat the competition for the grand prize.

Continuity:
During the choir's "Man in the Mirror" number, Dolly Parton mouths a wrong word.

Vi Rose Hill:
Well, maybe you were… five procedures ago!

The Gospel According to Latifah and Parton

"Joyful Noise" is a harmless, well-intentioned movie that was clearly
made with no goal in mind apart from being uplifting. It's easy to see
why the critical response has been largely negative; in its innocence,
it leaves many questions unanswered, whitewashes a number of harsh
realities, and repeatedly sidesteps plausibility for the sake of
entertainment. While I cannot argue with these observations, and while
the film is ultimately too flawed and predictable for me to recommend
it, I'm not inclined to be ruthless. Writer/director Todd Graff has his
heart in the right place. And because the subject is a gospel choir, he
treats us to a number of well-arranged musical interludes that showcase
some real talent. Regardless of whether the songs are Christian, pop,
or country, passion pours off of the screen each and every time.


The plot, while paper-thin, is easily understood and admirable in its
efforts to be inspiring. Taking place in a small Georgia town hard hit
by the economy, it begins with the sudden death of Bernard Sparrow
(Kris Kristofferson), the choir director for the local church. Chosen
as his replacement is choir member and second in command Vi Rose Hill
(Queen Latifah), who makes ends meet as a registered nurse. Bernard's
widow, G.G. (Dolly Parton), who's well off and one of the church's
major benefactors, believes she should have been chosen as the next
choir director, as she too is a member and believes it's what her
husband would have wanted. She's not the bitter type, so if you're
thinking she becomes evil and vindictive, you've got another thing
coming.

Because times are tough, and because the choir has consistently lost in
the national Joyful Noise gospel competition, the program is under
constant threat of being cut. If they can finally win this year, it
would give the people of their small community something to believe in.
The stern Pastor Dale (Courtney B. Vance) wants their music selection
to reflect the traditional gospel style. So too does Vi. G.G., on the
other hand, has come to believe that a more contemporary sound will
give them an edge. This puts both women at odds with one another, which
isn't all that shocking since they were never the best of friends to
begin with. There are many reasons for this, although it seems a
combination of class division and their own egos are the major
contributing factors. The film never wastes an opportunity to show how
headstrong they both are; Vi is a hardworking single mom resistant to
change, whilst G.G. can't go five minutes without dispensing an obscure
Southern proverb.

There's another, more character-driven side to the story, although that
doesn't prevent it from being just as conventional and easy to see
through. Vi is the mother of two teenagers. Her son, Walter (Dexter
Darden), has Asperger's syndrome, a trait that's likely to divide
audiences as it's debatable how seriously Graff takes it. He provides
Walter with reliably odd personality quirks, such as constantly wearing
sunglasses, spontaneous singing, a repulsion to being touched, an
inability to tell whether or not someone is joking, and a superfluous
mental database of one-hit wonders (none of which, he informs us, can
be found in gospel music). He also makes Walter keenly aware of his
personality defects; at one point, he tearfully admits that he's angry
at God for making him the way he is.

Her daughter is sixteen-year-old Olivia (Keke Palmer), who's at just
the right age to start acting out. She doesn't sleep around or become
an addict. She does, however, begin hanging around with G.G.'s
rebellious and outgoing teenage grandson, Randy (Jeremy Jordan), who
has returned to Georgia from New York after his mother kicked him out.
While his past is never revealed to the audience, it seems he has a
reputation for being a bad kid. Vi disapproves of him, which will
inevitably create friction between her and Olivia. Our instincts have
already told us that he's not bad, but has merely had a tougher time of
it than others and is at heart decent. He will join the choir and, with
his amazing singing voice, prove himself instrumental in pushing for a
new sound that will hopefully win them the upcoming competition in Los
Angeles.

I mentioned earlier that I wasn't inclined to be ruthless. I'm still
not inclined, although I do feel it necessary to point out a few of the
more overt missteps in "Joyful Noise." It's established that Olivia's
father (Jesse L. Martin) is a military man who was forced to rejoin the
army after losing his job. While Olivia is willing to see past this, Vi
clings to the misguided belief that he knowingly abandoned her. I would
wager that, if he stayed in town as an unemployed man, she would resent
him even more. In addition, we have a small subplot involving two choir
members who fall for each other; apart from the fact that both are
one-note typecasts, their story is so unfunny and badly strung together
that it actually ruins part of the final scene, which had the potential
to be very sweet. Finally, we have a painfully contrived scene in which
Vi and G.G. get into a slapstick catfight at a restaurant. If there's
one thing a movie like this doesn't need, it's two grown women acting
like children.