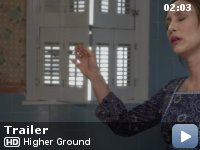 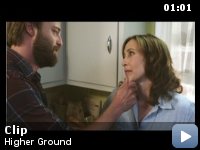 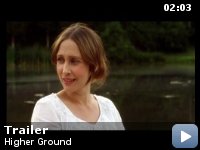 A chronicle of one woman's lifelong struggle with her faith.

Storyline
Vera Farmiga's directorial debut, HIGHER GROUND, depicts the landscape of a tight-knit spiritual community thrown off-kilter when one of their own begins to question her faith. Inspired by screenwriter Carolyn S. Briggs' memoir This Dark World, the film tells the story of a thoughtful woman's struggles with belief, love, and trust – in human relationships as well as in God.

Revealing mistakes:
At the therapist's office, the wall clock is clearly not working as the second hand is not moving.

Gentle and Deserved Critique of the Church.


Higher Ground is a beautiful and stirring tale based on a personal
memoir about a woman who, after growing up in a Christian church,
starts asking questions about what she's been taught. She delicately
steps around the admonition not to preach to men, quietly disobeys the
order against exploring her spirituality, and finally, at a turning
point, learns that it is OK to be sad and angry at God, that she does
not have to sing "It Is Well With My Soul" when it honestly isn't.


Though the film's critique of the church is firm and sharp in many
places, its observations are fair, loving, and certainly earned.
Besides being a thoroughly enjoyable film to watch, Higher Ground is an
excellent starting point for dialog. Those who are other than
Christian, even perhaps those who dislike Christians, may be able to
put voice to their concerns in a new way, and can maybe be led to see
that most Christians are honestly just trying to be the best they can
be. Christians can take the critique as a mirror to hold up to their
own congregations, looking for areas where perhaps they are
inadvertently hurting others or themselves. To those inside the church,
I would suggest that this film is a God-given opportunity to examine
yourselves, to open your eyes enough to realize that the church is not
infallible, and perhaps take the prompting to apologize for areas in
which you and the church have failed to represent Christ accurately.

Religious or not, whether you seek dialog or just pure entertainment,
Higher Ground is an excellent choice. It is worth every minute, a fun
way of looking at a serious topic, and it will always stand out in my
mind as an exceptional piece of art.