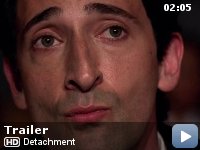 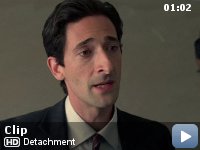 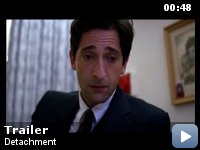 A substitute teacher who drifts from classroom to classroom finds a connection to the students and teachers during his latest assignment.

Storyline
Detachment is a chronicle of three weeks in the lives of several high school teachers, administrators and students through the eyes of a substitute teacher named Henry Barthes. Henry roams from school to school, imparting modes of knowledge, but never staying long enough to form any semblance of sentient attachment. A perfect profession for one seeking to hide out in the open. One day Henry arrives at his next assignment. Upon his entry into this particular school, a secret world of emotion is awakened within him by three women. A girl named Meredith in his first period. A fellow teacher Ms. Madison, and a street hooker named Erica, whom Henry has personally granted brief shelter from the streets. Each one of these women, like Henry, are in a life and death struggle to find beauty in a seemingly vicious and loveless world.

Michael Wincott was considered for a role.


Saw this at a local film festival with little to no information about
the movie whatsoever; little did I know this was going to become my
favorite film of the year, and that's saying a lot given that 2011 has
been a blast for moviegoers with new products by Woody Allen, Terrence
Malick, Lars Von Trier and Clint Eastwood.


The movie revolves around an poignant substitute teacher (perfectly
played by Adrien Brody) who arrives at a vicious school, where students
go around bullying people (including the teachers) and basically
throwing their lives directly to the dumpster…you know, teenage angst
and such…I didn't grow up in the USA, so two important things I must
say, a) I don't know if this is an accurate depiction of any given
school in America and b) I can't relate with the overall chronicle,
which brings me to my next point.

The beauty of this movie comes within the subtext, whether you can
directly relate with the characters or not, the movie takes the message
and widens its range so everyone is able to understand the actual
meaning of the film. Let's clear things out, this film is not about a
school or the basis of education, this is about trying our best not to
give a damn about others as most of us just go around doing everything
in our power to be happy ourselves with a lousy job, a loveless
marriage, a constant sense of abandonment or basically a crappy life
(all of the above portrayed marvelously in the film).

Films by Tony Kaye tend to be really visceral with a thin slice of
optimism in the undertones, I think this time he just went mental about
everything, in the end you'll leave the theater with a slight sense of
hopelessness, almost as if you're destined to watch daily misery
without the power to control anything but your own life, as if the only
battle you must fight is the constant reminder that even when
everything falls apart and slowly turns into dust, you can't change the
world, you just have to avoid the world from changing you…This exposed
stunningly in the final sequence of the movie.

Do yourself a favor, watch this film!

TagsUSA
The Sleeper
The Reunion