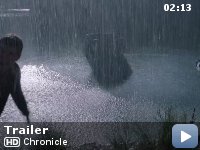 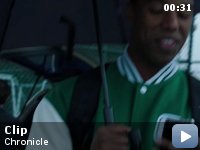 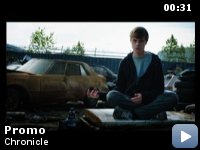 Three high school friends gain superpowers after making an incredible discovery. Soon, though, they find their lives spinning out of control and their bond tested as they embrace their darker sides.

Storyline
Three high school friends gain superpowers after making an incredible discovery. Soon, though, they find their lives spinning out of control and their bond tested as they embrace their darker sides.

Taglines:
Not all heroes are super.

Revealing mistakes:
When the boys are playing with Lego in Matt's room, Matt clicks his iPod to play music, but he obviously doesn't click the play button. The music begins to play regardless.

Matt Garetty:
Oh wow, look! A nerd with a camera!


Enjoy trolling? Enjoy watching people get trolled? Here's your movie.
Chronicle stumbled into theaters thoroughly undervalued. Although it
does have its flaws, it has paved an entirely new route in the worn-out
genre of superheroes. Chronicle brings all the major superhero
questions into play—Where did our powers come from? How should we use
our powers? In the end, however, those questions are irrelevant. This
movie is not about three superheroes. It is about three teenage boys
who just happen to have super powers.


This movie is quite extraordinary. All three of the main actors are
unknowns. When the movie begins, they all promise to me stereotyped
high schoolers—the popular one, the outcast, and the stoner. As the
movie progresses, those stereotypes become worthless. These actors were
up to the challenge. Each main character changes so much that you won't
recognize them from beginning to end. Mix this with the unique
storyline and this movie has an extremely strong core.

A good deal of this movie is enjoyable simple because it is realistic
to life. The bullying is brutal. The type of things that the main
characters do with their powers is exactly what I would do. That's the
shining point of this movie. It is true to life. It doesn't cover up
life or try to smooth it over with simplifications. This movie is
beautiful with its honesty. It allows the viewer to laugh hysterically
one moment and cringe the next.

The problems are minor but still present. The incredible climax is
followed up with a lackluster conclusion. The father's character is
rather over-the-top. I can't tell if it was the writing or the acting
that made it so. These two facts won't pull you away from enjoying the
movie. It's just too bad that such a good movie would end on such a low
note.

This movie is worth seeing. Some people will have trouble watching it
in theaters because it is a shot from the first person and can be jerky
at times. If you are okay with that, I would recommend seeing it in the
theatre. I saw this movie with a large audience—which appeared to add
to the experience. For the average Joe, this will be an enjoyable
movie. For the superhero fan, this could be a cult classic.