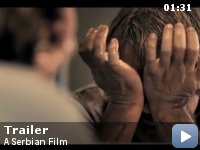 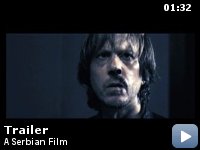 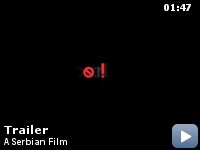 Shot in 61 days in locations of Belgrade, Serbia.

Revealing mistakes:
When Milos has a knife to his penis, if you look closely enough, he has cut his penis even though it doesn't "bleed".

Milos:
[acting in a pornographic film]
Baby, I'm gonna fuck you up.


OK, I finally got round to watching A Serbian FILM.

I consider myself to be in the heavyweight division when it comes to
having seen the most hardcore of horror/shock films, i.e, Slaughtered
Vomit Dolls, The Gateway Meat, Murder-Set-Pieces, Irreversible, Men
Behind The Sun, All the Cannibal films, Nekromantik….you name it,
I've probably seen it. Now, I have to say, NONE are as nasty as this
beast!

Im not going to say what happens in the film, but even for me, some was
hard to watch. BUT the actual film is GOOD!…If you can get through
it.

The basic story is about a guy called Milos, who is a retired porn
star, who in his day was the best actor in the business. Now he is a
bit skint, so when he gets offered one last job, offering him enough
money to set him and his family up for life, he just can't turn it
down. He asks what the film is about, but the employer is reluctant to
tell…..what happens is indescribable!!! Like I said it is very hard
to watch in some scenes, but the film is actually really good, and the
acting is solid throughout.

You got to think, the poorer European countries, are rife with crime,
and money goes a long way. So if you are having hard times and a
massive money offer comes your way…How far would you go!

For me 8/10, but I can't recommend it, simply for the content in the
film. But if you think you can take it, and can appreciate it for the
film it is, go for it!

TagsSerbia USA
The Artist
One for the Money