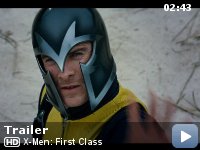 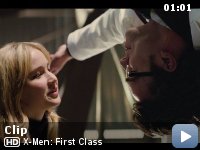 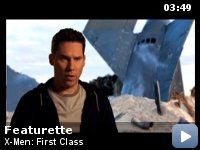 In 1962, the United States government enlists the help of Mutants with superhuman abilities to stop a malicious dictator who is determined to start world war III.

Storyline
Before Charles Xavier and Erik Lensherr took the names Professor X and Magneto, they were two young men discovering their powers for the first time. Before they were archenemies, they were closest of friends, working together, with other Mutants (some familiar, some new), to stop the greatest threat the world has ever known. In the process, a rift between them opened, which began the eternal war between Magneto's Brotherhood and Professor X's X-MEN.

Charlie Rowe was initially cast as the young Charles Xavier but, due to scheduling conflicts with
Neverland, he was replaced by Laurence Belcher.

Anachronisms:
At one point we see Moscow's Red Square and the Russian hotel behind Saint Basil's Cathedral, but this hotel was not built until 1967.

Charles Xavier:
Mother. What are you… I thought you were a burglar.

Mrs. Xavier:
I didn't mean to scare you darling. I was just getting a snack. Go back to bed. What's the matter? Go on, back to bed.I I'll make you a hot chocolate.

Charles Xavier:
Who are you? And what have you done with my mother?
[telepathically in her mind]

Charles Xavier:
My mother has never set foot in this kitchen in her life. And she certainly never made me a hot chocolate. Unless you count ordering the maid to do it.

A prequel that does not, in any way, suck. Amazing, isn't it?


There came a point, about half way through this film, when I emerged
from the world of wonder on screen, took stock of my emotions in that
instant, and realized that yes, by God, I am LOVING this movie.

I didn't really expect to, of course — although certainly, I hoped for
it. With such an incredible cast, an able director at the helm, a story
of Bryan Singer provenance and the inclusion of some of my favorite, if
lesser known, X-types (Darwin! Tempest! Havok!), I was eager to see
this beloved band of merry Marvel mutants redeem themselves after the
massive failures of X3 and X-MEN ORIGINS: WOLVERINE.

Which they do. And how!

One thing that the avid comic fan must do when approaching this movie,
however, is to divorce themselves utterly from almost all established
four-color X-Men continuity. Oh, some bears up, but by and large this
is a whole new origin story, a reboot of epic proportions, and yet it
is a retcon so cleverly done, and one that offers up a such a delicious
mélange of complex relationships and sensible motivation, that all of
the many discrepancies inherent in having Mystique on the side of good
or having Moira McTaggert a CIA agent simply do not matter.

Speaking of McTaggert, Rose Byrne is both comely and convincing in the
role, and almost every other actor is perfectly, one might almost say
forcefully, cast. McAvoy brings a kind of laddish charm to Charles
Xavier that he mixes nicely with both decency and naïveté, and Michael
Fassbender's nascent Magneto is relentlessly, even heart-breakingly,
compelling. Their chemistry is electric — theirs' is one of the most
multi-faceted and sincere bromances the screen has seen in a good long
while.

The younger cast all impress, though particular praise must go to
Oscar-nominee Jennifer Lawrence as the petulant but pitiable
Raven/Mystique (The Academy Awards have been good to young, hot
X-chicks; let us not forget that Rogue herself, Anna Paquin, won for
THE PIANO). Former child star Nicholas Hoult is also outstanding as the
troubled Hank McCoy, and perhaps the most surprising kudos must go to
teenage dream Lucas Till, who conveys the particular anti-social
asshole-hood of the turbulent Alex Summers very convincingly indeed.

The biggest letdown in the movie, acting-wise, is January Jones as Emma
Frost. True, she is appropriately ravishing, there can be no denying
that, but she lacks the… the zing of the written character. There is
very little intelligence, snark, or even personality behind her
interpretation of this most intriguing of mutants; she's just kind of
Stand There and Look Pretty — which, for one playing Emma Frost, is
something a travesty.

The only other weight under which this movie really labors is the fact
that it is a prequel, and it therefore suffers from the feeling of
inevitability that besets all such endeavors. Anakin Skywalker HAS to
go Dark Side. Bilbo Baggins HAS to find the One Ring. And Magneto HAS
to turn against humans; Mystique HAS to join him; Xavier HAS to end up
in a wheelchair. With these definite plot developments looming, their
eventuation is bound to be a bit of an anti-climax.

And yet the fun part about X-MEN: FIRST CLASS is the journey it takes
us on to get us there. Offering up plenty of surprises, some kickass
action sequences, mighty fine special effects, sly humor and a killer
cameo, it is without doubt the best comic book movie of the year – nay,
decade – thus far. And considering how overcrowded that list is, this
is really saying Something.

Huh. A prequel that does not, in any way, suck.