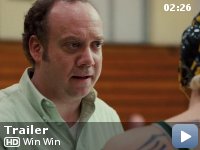 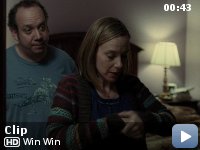 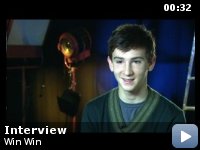 A struggling lawyer and volunteer wrestling coach's chicanery comes back to haunt him when the teenage grandson of the client he's double-crossed comes into his life.

Storyline
Disheartened attorney Mike Flaherty (Giamatti), who moonlights as a high school wrestling coach, stumbles across a star athlete through some questionable business dealings while trying to support his family. Just as it looks like he will get a double payday, the boy's mother shows up fresh from rehab and flat broke, threatening to derail everything.

Taglines:
In the game of life, you can't lose 'em all.

Jackie Flaherty:
I wanna go to Ohio and beat the crap out of his mom.

Jackie Flaherty:
No, I do. I want to beat the crap out of her and her stupid boyfriend.

Mike Flaherty:
I know you are. I just-I just don't think beating the crap out of everybody is the best solution, that's all.


Win Win is a terrific multigenre sleeper. It's funny, even hilarious;
it has mystery and action; and it features brilliant performances by
the always-reliable Paul Giamatti and Amy Ryan. It's also not a movie
that wallows in treacly messages, and it's not a movie that uses sports
as a crutch for "finding one's inner strength." In short, it's a
wonderful, top-notch movie.


Giamatti plays Mike Flaherty, a small-time lawyer who's running low on
cash. He moonlights as coach of the local high-school team, which is,
to put it bluntly, terrible. In a burst of fiscal sanity, Mike offers
to become legal guardian for Leo, one of his clients (played by the
crusty Burt Young), who's just been declared legally incapacitated.
Why? Because as his guardian, Mike gets $1500 a month. But since he
wants to avoid the extra hassle of actually taking care of Leo, he puts
him in a nice home. Seriously, it's a nice home, with nice people and a
big flat-screen TV.

At this point, the movie wants us on Mike's side – sort of. He needs
the cash, and he doesn't really want to tell his wife Jackie (Ryan)
that they're running low, not with two young daughters to care for as
well. Plus he's coach of a terrible team and is just swimming in
stress. Swimming in it. So much so that while jogging to work off the
stress, he suffers a panic attack.

Just when Mike thinks some of his problems have been solved, teenage
Kyle (Alex Shaffer) walks into his life. Kyle, it turns out, his Leo's
grandson, and they've never met. Kyle's been sent by his mom to visit
Leo. At first, this complicates things – especially when Kyle seems
awfully reluctant to go back home to Ohio – but then Mike's remaining
big problem is solved. It turns out the kid is a gifted wrestler. Who'd
have thought that? He looks scrawny, but in practices Kyle shows he has
the mettle. And thus things are riding well for Mike.

But this would be a truly dull (if inspirational) movie if things
continued to ride well. One thing we learn early on is that Mike
intentionally misled the judge in Leo's case, giving the impression
that he would be actively taking care of Leo. But things really get
going when Kyle's druggie mom (Melanie Lynskey) shows up to bring her
boy back – and to take over as Leo's guardian.

Too often, Giamatti has played real sad-sack characters, guys who just
can't seem to catch a break, guys who suffer at the hands of fickle
fate. Not so here. Mike isn't exactly a conniving mastermind, but he's
not an idiot, either, and he deals with each situation with logic and
reason, even as they spiral further out of his control. It's a
typically masterful Giamatti performance, and for once he's not a total
loser who's in over his head. He's even a half-decent coach who simply
has a lackluster team to work with.

Giamatti's not alone, though. I really got a kick out of Amy Ryan's
performance as his somewhat-exasperated spouse Jackie, who's not
terribly fond of suddenly having a teenage boy around at first. A few
years back, Ryan turned in an Oscar-nominated performance as a native
Bostonian in Gone Baby Gone. Ryan had a thick, believable Boston accent
then. Here, she's playing a New Jersey native, but at no point does she
go overboard with the Jersey Shore dialect. That's what good actresses
can do – they can dial it back when they have to and show a little
nuance.

Win Win is not a stand-up-and-cheer movie, although the audience at the
screening I attended applauded when it was over. It's not a crime
drama, and it doesn't really have a lot of twists to its plot. What
makes it work are all of the truly sincere, dead-on performances: by
Giamatti, Ryan, Shaffer, Lynskey, Bobby Cannavale, and even Jeffrey
Tambor as one of Mike's wrestling assistant coaches. Not a sour note in
the bunch, everyone at the top of his or her game.

This might have fared well, critically, if it were released during
awards season. It sort of reminded me of last year's Greenburg,
starring Ben Stiller, only funnier and sweeter. Win Win is a charming,
quiet movie that reminds us that, as the Grateful Dead once told us,
once in a while you can get shown the light in the strangest of places
if you look at it right.

TagsUSA
The Beaver
Tuesday, After Christmas