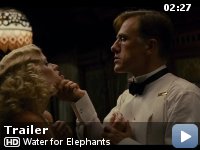 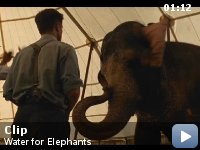 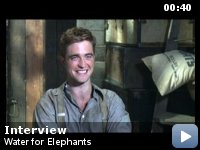 A veterinary student abandons his studies after his parents are killed and joins a traveling circus as their vet.

Storyline
After his parents' death, Jacob Jankoski is left penniless and homeless. Events lead him to joining the circus as their vet, working under their unstable boss August whose violent tendencies give everyone reason to be cautious around him, including his beautiful and quiet wife Marlena, whom August is very possessive of and who Jacob finds himself soon falling in love with.

Taglines:
Life is the most spectacular show on earth.

Scarlett Johansson turned down the role of Marlena.

Continuity:
When August hits Marlena, her diamond necklace disappears and reappears throughout the scene.

Jacob:
Who's the woman who works with the horses?


OK, I'll try to tell you a bit of what I thought about "Water for
Elephants", without spoiling anything. I have not read the novel (even
though I plan to do it now) so I'm only offering my views on the movie.

First of all: It's amazingly beautiful. The costumes and sets are
gorgeous, the cinematography is exquisite, the animals are cute
(especially Rosie the elephant) and the three leads are very easy on
the eyes as well.

Robert Pattinson was actually quite good. This was a surprise to me,
since I didn't really think he was anything special in any of the
Twilight movies or "Remember Me". He looked very appropriate for the
time the movie was set in, and even though I love Emile Hirsch (who
auditioned for Jacob too) I'm confident that Robert was the best choice
there was for this role, it was perfect for him. Hal Holbrook was also
very fitting for the role of older Jacob. The two actors really made me
believe that they were the same person in different stages of his life.

Reese Witherspoon was okay. She looked beautiful, was charming and cute
but it felt like something was missing – however, I can't think of any
other actress I would have liked better in the role, so I came to the
conclusion that it was probably the character Marlena that was a little
bland, not Reese.

But the true star of this movie was Christoph Waltz. I may be a bit
biased since I loved him in "Inglorious Basterds", but he was even more
perfect in this movie. His portrayal of August was amazing, he made him
likable and interesting and I was always compelled by his scenes. The
character reminded me a lot of Miles in "King Kong" (played by Jack
Black), a character that also wanted fame and success more than
anything and used questionable and even cruel methods to get it. He was
terrifying in some scenes too, but always believable. Also, in the
beginning of the movie i really felt the chemistry between August and
Marlena, which made the character even more interesting; however, I did
feel like Jacob and Marlena had chemistry too, and in my opinion this
way it was more realistic (both men loved her and she also cared about
both of them).

I loved the movie, and I really recommend it to everyone. I would
sincerely give it 10/10 stars. Of course there was some parts of the
movie I didn't like (particularly towards the end of it), but overall
it was a magical, spectacular and epic period movie, and I can't wait
to see it again!