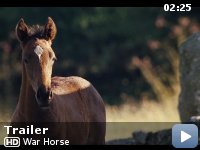 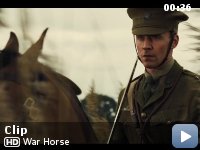 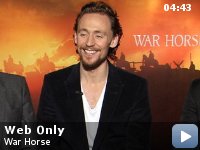 Young Albert enlists to serve in World War I after his beloved horse is sold to the cavalry. Albert's hopeful journey takes him out of England and across Europe as the war rages on.

Storyline
Dartmoor,1914: To his wife's dismay farmer Narracott buys a thoroughbred horse rather than a plough animal, but when his teenaged son Albert trains the horse and calls him Joey, the two becoming inseparable. When his harvest fails, the farmer has to sell Joey to the British cavalry and he is shipped to France where, after a disastrous offensive he is captured by the Germans and changes hands twice more before he is found, caught in the barbed wire in No Man's Land four years later and freed. He is returned behind British lines where Albert, now a private, has been temporarily blinded by gas, but still recognizes his beloved Joey. However, as the Armistice is declared Joey is set to be auctioned off. After all they have been through will Albert and Joey return home together?

Taglines:
Separated by war. Tested by battle. Bound by friendship.

Cameo:
[Michael Morpurgo]
Standing next to David Thewlis during the auction scene at the beginning of the movie.

Revealing mistakes:
When the German machine gunners reach their guns, they open fire without elevating their guns thus spraying bullets at around 1 to 2 feet above ground. However dozens of horses manage to come through this hail of bullets unharmed, while their riders sitting at least 5 feet above the ground die in scores.


The cast is full of fantastic actors whose talent is disappointingly
wasted in this film. I can't blame them, considering the schmaltzy
script they had to work with ("It's a miracle horse!" – somebody
actually says that. Actually, I think every character says that?).
Emily Watson's brow furrows expertly. David Thewlis sneers as required.
Peter Mullan stares remorsefully with perfection. Benedict
Cumberbatch's mustache should win its own Oscar, and if an Oscar could
be won simply for tearful lip quivering, Jeremy Irvine would win it for
sure. I only wish I could have taken any of it seriously. Actually, I
found myself caring more about the father's pennant than the horse.

Never have I seen such a display of dull writing, ham-fisted scripting,
utterly scattered direction and overkill cinematography. It's no
surprise they've evaded professional critics in screenings. I don't
know who they've targeted everywhere else, but the audience at mine was
largely seniors and veterans who all applauded it wildly. The younger
audience members I saw did not seem to be so impressed. Some in my row
were actually laughing quietly at all the wrong places. To be fair,
perhaps this movie is really intended for a very specific demographic
of which I'm not yet a member. Or perhaps, more likely, it was
deliberately manipulative.