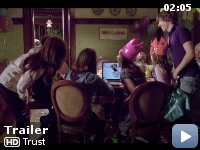 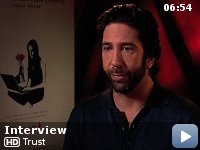 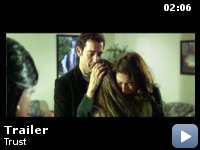 A teenage girl is targeted by an online sexual predator.

Storyline
A suburban family is torn apart when fourteen-year-old Annie (Liana Liberato) meets her first boyfriend online. After months of communicating via online chat and phone, Annie discovers her friend (Chris Henry Coffey) is not who he originally claimed to be. Shocked into disbelief, her parents (Clive Owen and Catherine Keener) are shattered by their daughter's actions and struggle to support her as she comes to terms with what has happened to her once innocent life.

Taglines:
What took her family years to build, a stranger stole in an instant.

Gail Friedman:
We can't control what happens to us or our loved ones. What happens when Annie goes to college?

Will:
What are you saying?

Gail Friedman:
People get hurt. There's only so much we can do to protect ourselves, our children. The only thing we can do is be there for each other when we do fall down to pick each other up.

A powerful and effective film


I had the privilege to be among the first in North America to screen
David Schwimmer's latest film last night at the Toronto International
Film Festival (TIFF), with cast members including Clive Owen and
Catherine Keener (two of my favourite actors) present as well as the
director, Schwimmer himself.

Before the screening, the former "Friends" star provided some valuable
context for the film, sharing his personal connection to the topic. It
was enlightening to learn that he himself is a dedicated advocate for
survivors of sexual assault/abuse and has spent a great deal of time
working and interacting with the families impacted, because the film
was executed with such a sensitivity and deep psychological
understanding around the difficult topic.

Before delving into my review let me just say upfront (for those who
are quickly trying to decide whether or not to see this) that this is a
good movie, and yes you should see it.

I also went into this film not knowing its rating and I can assure you,
that while the subject is very heavy and there are some disturbing
scenes and some violence, there is nothing here so sexually graphic
that it is too uncomfortable to watch – even my husband who I would
consider to be a "sensitive" viewer did not find the film to be
graphic.

"Trust" is the kind of movie that relies heavily upon the plausibility
of its dialogue and the believability of its actors. If the script was
poorly written or the innumerable emotional scenes poorly acted, the
whole thing might have been a disaster for Schwimmer.

Instead, Kenner and Owen turned in Oscar-worthy performances that
invited viewers into their home, their marriage and their suffering.
Under great direction, Owen led his character through a roller-coaster
of emotions that was accessible to viewers, as we shared in his
character's progression through anger, grief and understanding.

Not to be overlooked, and the true star of this film, is the young
Liana Liberato who plays the daughter and the victim with such
authenticity that it was at some times painful to watch. Not enough can
be said about how incredible she was in this film – I think the career
she has ahead of her will speak for itself.

Of course, the best acting in the world would have been wasted if the
screenplay was weak, but with Robert Festinger (who wrote the
screenplay for "In the Bedroom") on board, you can expect a convincing
storyline and dialogue that felt real.

At times, the film comes dangerously close to being cliché or cheesy
like a television drama or TV movie-of-the-week. And this is almost
inevitable when trying to make a cautionary drama with the underlying
objective of raising awareness around a societal issue. However any
time you feel the film beginning to veer down this path, it is rescued
by the incredible acting and you forget once more that you are watching
a film. Even the ending which I thought at first was a bit overly
sentimental, quickly took an unexpected and dark turn that, for me,
restored its credibility.

This is a powerful and very important film, not just for families but
also for David Schwimmer's career because now the sitcom actor-turned-
director has established himself as a serious and very capable dramatic
filmmaker who is not afraid to take on challenging material.

I'm not sure how well "Trust" will do outside of the film festival or
if it would appeal to mass audiences, however I do hope people see it,
especially those who care about this important issue.

I would definitely watch a David Schwimmer film again in the future –
he has legitimate talent behind the camera and should he make more
marketable movies in the future, he might actually make it big as a
director.

I give this movie a solid 8 out of 10. Congratulations to Schwimmer and
your team on this great accomplishment. And, as a woman and caring
citizen, thank you for telling this story.