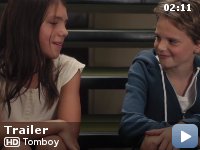 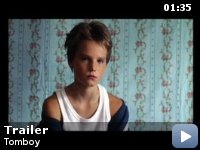 A 10-year-old girl, settling into her new neighborhood outside Paris, is mistaken for a boy and has to live up to this new identity since it's too late for the mistake to be clarified.

Storyline
A family moves into a new neighborhood, and a 10-year-old named Laure deliberately presents as a boy named Mikhael to the neighborhood children. It is heavily implied that Mikhael is a closeted transgender boy. This film follows his experiences with his newfound friends, his potential love interest, Lisa, his younger sister and his parents. It focuses in on the significance of gender identity in social interaction from an early age, the difficulties of being transgender and young, and how Mikhael navigates these in the background of childhood play and love.


This sweet, tender coming-of-age drama from Celine Sciamma is a real
charmer.

Zoe Heran plays Laure, the ten-year-old tomboy of the title, who has
moved with her parents and six-year-old sister to a new town. She'll be
starting at the local school in a few weeks, but until then she spends
the summer babysitting her sister for her very pregnant mother while
dad's out at work and hanging out with the other children that live in
the apartment complex. The only problem is Laure has told her new
friends that she's a boy, and that his name is Mikael. Mikael becomes
close to Lisa and a mutual crush develops. With the first day of school
– and discovery of her secret – rapidly appraching, Laure becomes
increasingly anxious to keep hold of the happiness she finds in being
Mikael.


With the focus squarely on the children – a hugely endearing bunch of
varying ages – a significant portion of the film simply shows them at
play, and those scenes are the film's best with the actors delivering
naturalistic and thoroughly genuine, authentic performances – it
appears the director was simply content to just quietly and
unobtrusively film from the background while they behaved like, well,
children. The consequence is that it's a film full of laughter. That
infectious laughter is so central to the film that it's still happily
ringing in my ears hours after the credits rolled.

Heran is great; totally convincing in what is essentially both a male
and female role. The most delightful moppet award goes to Malonn Levana
as the sister. Wise beyond her years but a million miles away from all
the Hollywood clichés that phrase brings to mind, her relationship with
Laure is the film's most important and the chemistry between the two
girls is magnificent. The tenderness and understanding present in that
relationship extends throughout the family as well: the film is filled
with quiet, intimate moments shared between them. They're not cartoon
characters and they're not idealised, they're just a really nice little
unit and it's a joy to spend 81 minutes in their company.

It's not all sweetness and roses though. Mikael's self-made predicament
is as uncomfortable for the audience as it is for him. As he and Lisa
fall for each other the unfairness of his lie starts to sting, and
simple things like going to the toilet cause problems too. Obviously
things won't end well, but when Mikael is finally discovered the
fallout is refreshingly credible: people get very, very hurt, and it's
heartbreaking to watch.

However Tomboy thankfully ends on a hopeful note. It's a rare trick to
craft a film so uplifting, so powerful, yet remain completely committed
to authentic human emotions and an admirable absence of audience
manipulation.

And wait 'til you meet that baby! More reviews at

TagsFrance Paris
The Conspirator
The High Cost of Living