The Women on the 6th Floor 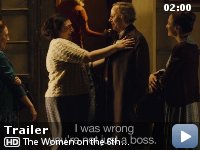 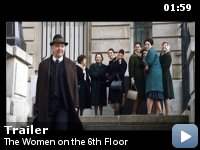 In 1960s Paris, a conservative couple's lives are turned upside down by two Spanish maids.

Storyline
Paris, in the early 1960s. Jean-Louis Joubert is a serious but uptight stockbroker, married to Suzanne, a starchy class-conscious woman and father of two arrogant teenage boys, currently in a boarding school. The affluent man lives a steady yet boring life. At least until, due to fortuitous circumstances, Maria, the charming new maid at the service of Jean-Louis' family, makes him discover the servants' quarter on the sixth floor of the luxury building he owns and lives in. There live a crowd of lively Spanish maids who will help Jean-Louis to open to a new civilization and a new approach of life. In their company – and more precisely in the company of beautiful Maria – Jean-Louis will gradually become another man, a better man.

Taglines:
Help is on the way.

Anachronisms:
In the street, most (if not all) men wear hats, caps or Basque berets. In France, most men stopped wearing headgear in the 1950s (in cities at least). By 1960, the vast majority of men were hatless.


A great review by Robert Beames (coulden't have done it better
myself!!) It has been given the more toner-friendly English language
title of Service Entrance, but comic French drama Les Femmes Du 6eme
Etage translates literally as The Women on the 6th Floor. Shown out of
competition in Berlin, the film was very warmly received thanks in part
to the performances of its sweet and amiable leading man, Fabrice
Luchini, and its beautiful Spanish leading lady played by Natalia
Verbeke. These actors combine with the film's leisurely pacing and
entertaining scenario to ensure that it is a winsome and inoffensive
crowd-pleaser.

The film, set in the 1960s, follows a wealthy, middle-aged Parisian
stockbroker named Jean-Louis (Luchini) whose long-standing maid quits
following a row with his demanding wife Suzanne (Sandrine Kiberlain).
Unable to clean up after themselves, the couple desperately need a new
maid. But when Suzanne's high society friends insist French maids
aren't the done thing anymore, she enlists the help of Maria (Natalia
Verbeke), a feisty, young Spanish immigrant. Jean-Louis forms an
instant and obsessive attraction to her and to all things Spanish, soon
striking up unlikely friendships with all the Spanish ladies who live
in the servant's quarters above his home – a place he knows nothing
about despite living in the building his entire life. Worlds collide
and good-natured japes ensue as he helps each lady adjust to life in
France whilst himself inheriting a new found love of life.

I don't think it's necessarily a coincidence that both the more
shamelessly enjoyable films I've seen here up to now have been broad
comedies about cultural difference and histories of mass immigration –
with Almanya looking at German-Turks and Service Entrance exploring the
relationship, and the comedy that comes of misunderstanding, between
the French and their Spanish workforce. Immigration is still a
political hot potato issue in these countries, as it remains in much of
Europe, and maybe light-hearted comedy is seen as the best way to
preach tolerance, reaching a bigger audience than earnest polemic. In
mocking bigotry and by setting it in the past (as an old fashioned
attitude) perhaps it is felt that people might be less inclined to
identify with those views.

In any case both films are funny and have their hearts firmly in the
right place. This French offering is gentler and less ballsy than it's
Turkish-German counterpart, but no less enjoyable. The character of
Jean-Louis is incredibly easy to like, being child-like in his
enthusiasm for his new-found interest in Spain. The character of
Suzanne is also refreshingly balanced and nuanced. She'd usually be a
two-dimensional figure we would be encouraged to dislike in order to
make it permissible for Jean-Louis to consider romance with Maria and
yet the film doesn't go down that route: she can be annoying and
insensitive but she isn't a nasty person. Maria and the other Spanish
ladies are also a joy to watch as they interact with one another and
fuss over cheerful little Jean-Louis.

Service Entrance is the filmic equivalent of a soufflé and certainly
not a tough watch typical of the standard festival fare. Indeed it
falls into the dubious realm of the "feel good" movie. But sandwiched,
as it is here, between two-hour long Shakespeare adaptations, Bela Tarr
movies, Argentinian slow cinema and films about nuclear disasters, it
is exactly the kind of film you need to see in order to keep sane. It
is difficult to say whether wider criticism in France will be anything
like as positive when removed from this context on theatrical release,
but here it offered exactly what was needed and nobody appreciated that
more than I.

TagsSpain
The Hunter
A Monster in Paris