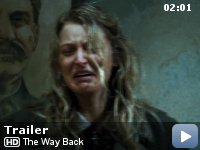 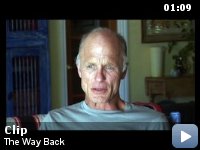 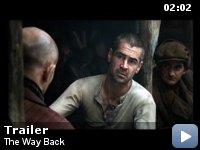 Storyline
In 1941, three men reach India from Tibet, having walked 4000 miles after escaping a Siberian gulag. The film tells their story and that of four others who escaped with them and a teenage girl who joins them in flight. The group's natural leader is Janusz, a Pole condemned by accusations secured by torturing his wife; he knows how to live in the wilds. They escape under cover of a snowstorm: a cynical American, a Russian thug, a comic accountant, a pastry chef who draws, a priest, and a Pole with night blindness. They face freezing nights, lack of food and water, mosquitoes, an endless desert, the Himalayas, and moral questions of when to leave someone behind.

Taglines:
Their escape was just the beginning

When Janusz and the others spot the tattoo of Lenin and Stalin on Valka's chest, he angrily replies that they were great men. Such tattoos were in fact employed by criminals in the false hope that they wouldn't be shot there as it was supposed to be illegal to deface an image of either Lenin or Stalin; although it is well-known that the executions were conducted via shooting in the back of the head.

Errors in geography:
In one of the frames, which captures the journey of the characters towards south while in Mongolia, the backdrop is that of a setting sun and the characters are shown moving from right to left of the frame (screen), which means they are moving towards north and not south.

Title Card:
September, 1939 / Hitler invades Poland from the West. Several days later Stalin invades from the East. They divide the country between them.


Peter Weir's follow-up to Master & Commander (2003) is the unflinching,
stark, & brilliant The Way Back, which takes on the weighty theme of
man's struggle for freedom.

At the dawn of WWII, several men escape from a Russian gulag. The film
details their perilous & uncertain journey to freedom, as they cross
deserts, mountains, & several nations.

The cast is a clever mix of seasoned pros & relative newcomers. Ed
Harris, in the role of the sole American, lends his usual gravitas.
Colin Farrell borrows from his In Bruges character, but the addition of
bad jailhouse tattoos is wildly amusing, & his Russian is quite
passable. It's always nice to see Mister Farrell doing serious work,
rather than bland fluff like Miami Vice or SWAT. Mark Strong's brief,
but plot-essential appearance is joyous.

Jim Sturgess gets a chance to redeem himself from the disastrous flop
21, & does a fine job here, as the central character. & the adolescent
Saoirse Ronan belies her extensive & impressive resume with an
understated performance that sparkles against the men's terse asperity.

Breathtaking vistas that serve as the backdrop to the cast's efforts
lend The Way Back an epic feel, echoed by mature editing, & mavellously
restrained use of music.

This is, quite possibly, the most serious film Peter Weir has ever
directed, & the result is both thought-provoking & inspiring. We can
only hope that it gets a proper release, & is allowed an opportunity to
reach its grown-up audience.