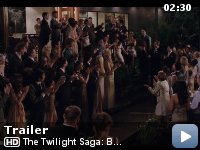 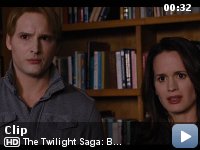 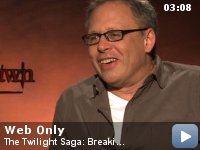 The Quileutes close in on expecting parents Edward and Bella, whose unborn child poses a threat to the Wolf Pack and the towns people of Forks.

Storyline
The Quileutes close in on expecting parents Edward and Bella, whose unborn child poses a threat to the Wolf Pack and the towns people of Forks.

Taglines:
Forever is only the beginning

Director Bill Condon reveals in the DVD commentary that the Isle Esme house had to be recreated on a sound stage in Baton Rouge, Louisiana due to production only having one week on location in Brazil. Most of the indoor honeymoon scenes were shot on the sound stage in Louisiana and not in Brazil.

Revealing mistakes:
When Edward lifted up Bella in his arms to their honeymoon place, Edward loses his balance as if Bella was too heavy. That is impossible since Edward has super human strength and she is still human.

Jacob Black:
Sam's lost the element of surprise and he doesn't want to take you on outnumbered, so he's not gonna come at you head on. He's got the place surrounded and he'll wait for his opportunity.

Emmett Cullen:
We won't get through without a fight.

Dr. Carlisle Cullen:
No fights. We won't be the ones to break the treaty.

Jacob Black:
The treaty is void, at least in Sam's mind.

Esme Cullen:
Not in ours.

Bill Condon has achieved the seemingly impossible task of filming that
which had been deemed 'unfilmable'.

The book ending for Eclipse (with Jacob running away after receiving
the invite to Bella & Edward's wedding), which was left out of the
Eclipse film, is where we begin this movie. Breaking Dawn Part 1
thankfully takes its time with (most of) the important moments from the
book. The preparation for the wedding, the wedding itself (most
intricate back of a wedding dress EVER), the honeymoon (complete with
leg-shaving!), and everything involving the pregnancy – these sections
of the film are the most focused upon. That said, there are some things
left out that may upset some fans. Jacob's section of the book?
Condensed. Considerably. Hope you weren't expecting to see the stuff
involving him going off to look for somebody to imprint on. It's not
here. Sadly, one of the parts I liked most about the book (the stuff
with Jacob, Seth & Leah) has been vastly shortened. But at least the
major points are there. Maybe we could of got more of them instead of
that rather pointless fight scene between the Cullens and the wolves?


Regarding the sex scene and birthing scene, which everyone wants to
know about: Well, Bella & Edward having bed-breakingly good sex *is*
included, but you can sort of tell there have been cuts. The birthing
scene fares a bit better. There is more blood in this scene (and a
nightmare Bella has early in the film) than the whole of the three
previous movies combined. I can see how this would have been trimmed
down also, but I think they really did include as much as they possibly
could given the rating (here's hoping for an unedited DVD release). It
is definitely an intense emotion-charged scene. Clearly giving birth to
half-human half-vampire offspring is no picnic. Dawn isn't the only
thing breaking in this movie. There's also the breaking of Bella's
bones, thanks to the spawn crushing her from the inside out. One thing
the movie nails is making Bella look as sickly as possible. She's so
skeletal it's disturbing.

Kristen Stewart is put through the wringer in this film. There's a vast
array of feelings Bella has to tangle with. And, yes, she *does* smile,
though the happy feelings don't last very long. Edward (or 'The Hair'
as Jessica calls him) matches Bella in regards to the number of
emotions she goes through. He has to carry all this guilt over the one
he loves most, and it clearly takes a toll on him emotionally as much
as the pregnancy does on Bella physically. Poor Jacob, meanwhile, isn't
having any fun either. These three characters deal with so much
throughout the film. Stewart, Pattinson and Lautner (with new stubble)
all sell it.

Most characters get at least a brief moment to shine. Some Cullens who
aren't Edward get a bit more dialogue than usual (Elizabeth Reaser as
Esme is probably the most happy about this). I especially liked seeing
some conflict between Alice and Rosalie in regards to Bella's child.
The wolves have a few brief scenes here and there. I was thankful for
more Seth and Leah in particular. And we finally get to hear what
werewolf telepathy sounds like. It's definitely chaotic (which makes
sense). Billy Burke and Sarah Clarke as Bella's parents get some great
moments, both emotional and humorous. Even new characters like the
Denali clan get some screen time. Keep an eye on that Irina (Maggie
Grace, who manages to do a lot with a little amount of screen time),
she'll be important in Part 2. Bella's friends maybe get a line each.
Jessica (Anna Kendrick, who still steals every scene she's in) gets the
most. She, along with various other characters, add humour. Given how
heavy the storyline is in this film, the humor is a much-appreciated
relief.

Things do get very dark post-honeymoon. And one must admire Condon for
taking on this film and tackling such touchy subjects as: the fact
Edward can't be with Bella completely (while she's still human) without
causing bruises. Does he let Bella die giving birth to their spawn?
Does Jacob remain loyal to his tribe or side with those he has hated
for so long in order to protect Bella? And what of the all-important
'imprinting'? Thankfully, we get a look at what Renesmee will look like
when she grows to adulthood (which will be when Jacob starts thinking
of her in THAT way. So don't get your panties in a twist about it. If
you paid attention, you will know how imprinting works and it won't
seem as freaky as it initially sounds).

Condon should also be commended for his direction, as his choice of
shots add so much to the film. We even get a look inside Bella to see
how the venom changes her. The effects on display during her
transformation are really something. I also liked that they included
flashbacks to the previous films as we hear Bella's Lullaby play.

If you don't like anything to do with the Twilight franchise, then
you're not going to change your opinion by this point. Haters will
hate. But for those of us who appreciate it, this movie is a fine
interpretation of the first half of the book. As well as the choices of
music used, something else these films have always done right is remain
true to the source material, including (most of) the important
dialogue/moments from the books. Things end in a logical place and
leave you anxiously awaiting Part 2. And if you stay for a little while
after the end credits start, there's an extra scene involving the
Volturi.