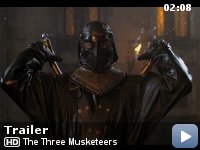 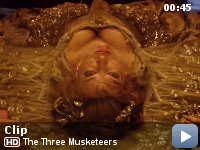 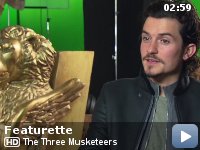 The hot-headed young D'Artagnan along with three former legendary but now down on their luck Musketeers must unite and defeat a beautiful double agent and her villainous employer from seizing the French throne and engulfing Europe in war.

Storyline
After failing in a scheme to steal Leonardo Da Vinci's airship blueprints, the Musketeers are disbanded by Cardinal Richelieu leaving Athos, Porthos and Aramis on the streets of Paris. In the meantime, the young, reckless and ambitious D'Artagnan has set off from Gascony with dreams of becoming a musketeer himself, not realizing that they have been disbanded. In no time, D'Artagnan manages to offend Athos, Porthos and Aramis on different occasions and challenges them all to duels. However before the duels can take place they are attacked by guards, trying to arrest them for illegal dueling. The ex-musketeers and D'Artagnan fight off the soldiers, leading to the four men becoming a band with the motto of "All for one, and one for all". Count Richelieu is not only determined to be rid of the musketeers, but also schemes with Athos' former lover Milady to undermine the reign of King Louis and his wife…

Taglines:
Every legend has a new beginning.

Playing Rochefort, Mads Mikkelsen in this movie wears an eye-patch over the very same left eye that his Le Chiffre character wept blood in
Casino Royale. It's also over the eye Mikkelsen missed in
Valhalla Rising when playing the viking warrior/spirit known as One-Eye.

Factual errors:
The Spire on top of Norte Dame which impales one of the airships, was not built until the 1800s. The Church was restored starting in 1845 lasting 23 years, it was during this time that the Spire was added to the building.

Constance:
Are you always this cocky?

D'Artagnan:
Only on Tuesdays… and whenever beautiful women are involved.

Constance:
So, you think I'm beautiful?

There is stupid logic, no logic and then there is…


The three musketeers, and by god am I disappointed. I mean don't get me
wrong I excepted a simple story with typical elements, nice fight
scenes and a great cast that can act great. Except for the actually
really cool looking fights I didn't get anything, the cast is great but
the dialogs and script are so horrible even Christoph Waltz couldn't
save them. The story is all over the place, you don't get to know any
of the musketeers, or barely a character at all and the biggest
problem: A movie doesn't have to be realistic for me but it has to make
sense in his own universe of the movie (like Matrix its not realistic
but logical). The three musketeers plays with the rules of physics,
logic and sense of a human being like they were beanbags. Oh and
surprise surprise: 3D is useless, but thats nothing new tell me a movie
that really had to have 3D except for avatar or maybe tron.


Movie with a simple plot fine , one that makes no sense at all, you
better don't count on my vote.

So if you can enjoy a pointless excuse of a story for some nice
swordplay, have fun.