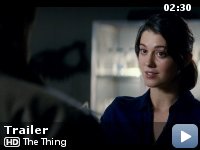 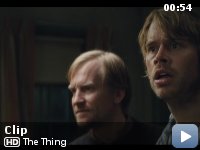 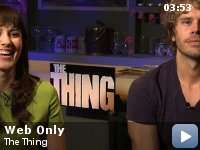 At an Antarctica research site, the discovery of an alien craft leads to a confrontation between graduate student Kate Lloyd and scientist Dr. Sander Halvorson.

Storyline
At an Antarctica research site, the discovery of an alien craft leads to a confrontation between graduate student Kate Lloyd and scientist Dr. Sander Halvorson. While Dr. Halvorson keeps to his research, Kate partners with Sam Carter, a helicopter pilot, to pursue the alien life form.

Taglines:
It's not human. Yet.

An enormous amount of screen shots from the first movie were kept on the set while filming at all times, in order to ensure that the Norwegian station would be rebuilt to the smallest details.

Incorrectly regarded as goofs:
Since logically, there must be a period in the year where each point on the surface of the Earth experiences night and day in a 24 hour period (since the Earth rotates rather than jumps instantly so as to have 24hrs night or day at the poles), it is not a goof that the plot depicts night and day in Antarctica within a 24 hour period. This is possible for any point in the either polar region, providing the observer is not situated at the EXACT pole of rotation.

Peder:
[In Norwegian]
Okay, I've got another one. A good one. A man and woman are making love one night when their young boy walks in.

Just came back from a preview screening of the new 'The Thing,' a
prequel to the 1980s film 'The Thing,' which, is itself a remake.
Hahah…

I am a HUGE fan of the 80s 'The Thing' so I was rather nervous about
this 'prequel.' It seemed just a remake, but with CGI, and a female
lead….

HOWEVER….It's surprisingly really good. It is NOT just a beat for beat
remake of the remake, AND it contains some excellent practical monster
effects early on.

REALLY GOOD MONSTERS. As in straight up LOVECRAFTIAN beasties…

And when the creatures do go more digital the designs are so lurid and
insane and horrendous that it worked for me. It feels right and is
super gross….Great sound design…drippy, snarly stuff….Good bass
heavy ominous soundtrack as well.

So yes, consider me very pleased and very surprised.

(ALSO: Do NOT immediately get up when the credits roll or you will miss
awesomeness that connects this film into the 80s one….)