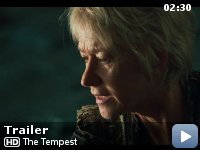 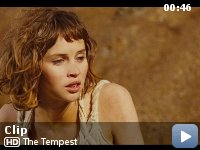 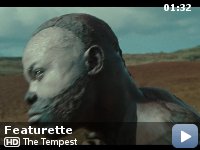 Shakespeare's epic play is translated from page to screen, with the gender of the main character, Prospero, changed from male to female.

Storyline
In Julie Taymor's version of 'The Tempest,' the main character is now a woman named Prospera. Going back to the 16th or 17th century, women practicing the magical arts of alchemy were often convicted of witchcraft. In Taymor's version, Prospera is usurped by her brother and sent off with her four-year daughter on a ship. She ends up on an island; it's a tabula rasa: no society, so the mother figure becomes a father figure to Miranda. This leads to the power struggle and balance between Caliban and Prospera; a struggle not about brawn, but about intellect.

a crazy mix of the sublime, the visionary, the ridiculous and the dry/dull


The Tempest shows a filmmaker just itching to let loose her turbulent,
big-splash-of-a-canvas vision of Shakespeare onto the screen, and the
itch, for better or worse, is scratched sufficiently. This is a work
that takes the delightfully and eerily dark take on the Bard that
Taymor had before with Titus and suffuses it with the
computer-generated surreal landscape of Across the Universe. Whether
you can really dig into Taymor's films or not, to varying degrees for
some, at the least it's hard to ignore her artistic prowess, of pushing
the envelope of what might be acceptable or just what is "normal" and
stretching the boundaries until you wonder what boundaries are even for
in the first place – that is, you wonder so that people like Taymor or
Terry Gilliam can break them, f*** them about, and give audiences
something different with the acting and the mood of the piece while,
oddly enough, staying true to at least the original spirit of the
source material (Beatles, Frida Kahlo, the Bard).


This time her Tempest is almost nearing all over the place visually,
but luckily it's anchored on one of Shakespeare's most underrated works
; it's one of my personal favorites from him actually, a work drenched
in fantasy and ideas of late 16th century God's law and man in the high
and low areas of class, meaning those who have it (i.e. explorers) and
those that don't Djimon Hunsou's native character. The big change to
anyone who has read the play is that Prospero is now Prospera, played
with big emotions and big movements of poise and stamina by Helen
Mirren. Oh she's a force to be reckoned with, as a star and as a
character that she's playing, and she's a practitioner of alchemy. This
might already be subversive – in that time and era women like that were
branded witches right away, but here it's something that is not only
encouraged but flaunted – but then comes more 'colorful' though normal
elements of explorers, washed up on the shore, and part of the King's
army of sorts (Alfred Molina and Chris Cooper make up some of this
bunch).

There's also a love story thrown in the mix between the two youngest
members of the cast, actors whom, I'm sorry to say, I don't remember
their names as they are kind of forgettable due to the script and
Taymor's direction of them. I get the sense that among the rest of what
she has to work with this is either the thing she's least concerned
with, or she botched this part of the film. I didn't really buy any of
this young-love stuff, not the interactions or the dippy acting, or
even (to go back to the source if it's that) Shakespeare's dialog. This
and a few other odd moments, such as a few scenes with CGI (some of it,
though not all of it, with Ben Whishaw's spirit character Ariel who is
up there with the clouds and the smoke of air) do detract from the
quality of the rest of the film.

The rest of it, I should add, is a lot of fun, and extraordinary to
take in. Djimon Hunsou makes his Caliban a terrifying but oddly
sympathetic character, one who will do bad things and can- the scar on
his face says 'Don't mess with me, Whitey' pretty clearly, even if it's
said in old-school Bard speak- but has also been damaged over time.
There is some depth there that isn't with some of the other supporting
characters, as interesting as they are and acted as well as they are.
Among the lot that I've mentioned and who are really excellent in
scenes that just need plenty of good close-ups and not too much music,
Molina, Cooper and a magnetic David Straitharn take up really good
chunks of screen time.

The oddity here is Russell Brand. Appearing as himself, or what I can
figure is him"self" after playing a similar crazy rock-and-roll type in
Judd Apatow comedies, here he's kind of the Fool character, Trinculo,
and it was kind of delightfully bizarre to see him here doing his thing
with such gusto and humor. Maybe that was Taymor's intention, as with
Mirren as Prospera in a way, to give this work that is centuries old
and dealing with the aspect of Post-Colonial theory a modern uplift and
change up the nature of the characters without taking too much away
from their roots. But more to the point, one of the strengths of the
film and that Taymor connected with is that Prospera's an artist in her
own right, only with magic, and may be reckless with her 'art' but will
go to the lengths that she will do to her will. An extreme example, but
I have to wonder if what Taymor is doing here, as all over the place
and great and not-so-great as it is, in its broad strokes its a really
raw expression of her own art through this flawed ex-member of royalty.

Taymor's work is an "acquired taste" as the euphemism goes, another way
of saying "go in at your own risk". The wild takes on set-pieces like
the ship-crash, the trippy-hallucinogenic visions of characters, and
the eccentric acting turn the Tempest into a curious delight, but you
need to expect something like that. This is Shakespeare for the Modern
Museum of Art group, not for stuffy intellectuals looking for
Masterpiece theater. For its faults, some of them crucial, its alive
and throbbing and that's good to have in this Awards season.