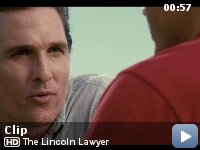 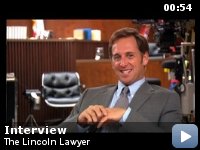 A sleazy defense attorney has a crisis of conscience when he represents a wealthy client who has a foolproof plan to beat the system.

Storyline
Mick Haller is a defense lawyer who works out of his Lincoln. When a wealthy Realtor is accused of raping a prostitute, Haller is asked to defend him. The man claims that the woman is trying to get some money out of him. But when Haller looks at the evidence against him, he learns that this case might be linked to an old case of his.

Mickey Haller also makes an appearance in the Michael Connelly novel "Nine Dragons". In one scene of that book a suspect claims that Matthew McConaughey can provide an alibi for him.

Continuity:
Mick is injured by the gunshot in his left arm. However when he comes out of the hospital his right arm is bandaged instead.

Mick Haller:
I checked the list of people I trust and your name ain't on it.


I know what you're thinking and I can agree with you that the name,
Matthew McConaughey, does not instill great confidence that you're
going to get a great movie experience. Now that is not to say that
McConaughey hasn't done some great movies. For every Ghosts of
Girlfriend's Past, Sahara, and Failure to Launch there are We Are
Marshall and How to Lose a Guy in 10 Days. Lincoln Lawyer is luckily
part of the later group and reminds us that McConaughey can carry movie
without having to take off his shirt in every scene.


Lincoln Lawyer is a thrilling drama about a cocky and smooth defense
attorney Mick Haller, played by McConaughey, who represents a
high-profile client on charges of attempted murder. But as new evidence
continues to pile on, Mick starts to grow suspicious that perhaps his
client isn't telling him everything. With twists and turns at every
corner, Lincoln Lawyer keeps you guessing till the very end.

With the help of that distinct country voice and southern charm,
McConaughey takes the movie to another level with this portrayal of the
fast-talking lawyer. With the role of Mick, McConaughey is actually
given a chance to show off a range of emotions that will truly surprise
viewers. Mcconaughey doesn't carry this alone, Lincoln Lawyer gets some
great acting from the likes of William H. Macy, Michael Pena, John
Leguizamo, Josh Lucas, and Marisa Tomei. The only black sheep of his
movie comes from the alleged murderer Louis Roulet, played by the ever
wooden Ryan Phillippe. The only thing I find amazing from Phillippe's
attempt at acting is his unique talent to deliver every line of
dialogue without moving a single muscle on his face.

The tension and intensity that begins to engulf Mike as the case
continues is stellar. Lincoln Lawyer really pushes Mike to edge as his
whole world becomes begins to collapse due to his Attorney-Client
relationship. This is where Lincoln Lawyer really comes alive and
delivers a must see movie experience. The court room scenes are some of
my favorite scenes in the movie and there are plenty. The approach they
took to portraying the lawyer aspect of the film feels accurate and
realistic. The plot is solid and keeps you invested right from the
beginning and keeps the grip tight throughout the movie. The movie
keeps a good pacing and the dialogue is smart and witty. The film's
color and camera work gives a very raw feel although at times it can be
a little too unstable. The story and characterization is done well but
there are a few things that should have been given more focus, like
Mike and Maggie's relationship and more insight as to why they got
divorced. The movie touches on the idea with a scene or two but never
really reveals too much. We also never really get too much on Mike's
relationship with his daughter. My biggest problem with the film was
the underwhelming ending that really had everything necessary to end
the movie with, but still felt lackluster when it came. However, don't
let these few problems sway you. I strongly recommend this film and
promise you that you will leave satisfied.