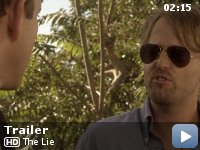 A man's life is altered unexpectedly after telling a lie to get out of work.

Storyline
A man's life is altered unexpectedly after telling a lie to get out of work.

Taglines:
He's about to have a moment of truth.

The truth, the whole truth, and nothing but one lie


Even in its short runtime, The Lie manages to provide us with some very
convincing characters instead of typical caricatures provided in films
now. This is a surreal, sometimes brutally honest look at life when it
gives you a little less than what you're hoping for. When reality
exceeds your dreams and you begin to enter your midlife crisis when
you're twentysomething.

Our main character, Lonnie, is played by The Blair Witch Project's
Joshua Leonard. He also gets the writing and directing credits making
this his first effort at both. Lonnie is an unsatisfied worker at a
video production house, hoping that his music career with his buddy
Tank (Webber) will soon take off. His wife Clover (Weixler) is hoping
to work at a drug facility as soon as she and Lonnie reach an
agreement.

They have a kid together. Six month old Xana, who is cute as a button.
But she, sadly, becomes victim to a crucial lie told by Lonnie which I
dare not spoil. Soon, Lonnie watches his life spiral out of control,
with no end in sight. On top of everything, he worries that his wreck
of a life will become a permanent, everyday thing.

I'll save everyone the same misconception I had walking into The Lie –
it is not erected from the ground up on the typical, "lie spiraling
beyond one's control" schlock. It doesn't throw one over-exaggerated
effect after another as one would think until it becomes virtually
uncontrollable. It actually becomes pretty humanistic and comparable to
maybe one person's real consequences.

Being that this is Leonard's first effort in the directing and writing
field, it's important to pick up on how he handles the story and the
direction. He does a pretty decent job. Especially in scenes where the
film clearly avoids clichés, one being when the lie is finally
discovered to be a lie by someone. It doesn't become a screaming,
shouting, f-word contest between the two characters. It's handled in a
human-like, yet sort of unlikely manner. If someone actually discovered
the lie's origin, especially one like this, I believe they would be
upset beyond any form of recognition.

That is why the ending is a bit shaky and mildly disrupts the flow of
the whole film. We've become so attached to these characters it
would've been nice if we had a bit more time to spend with them. It's
not that the ending we get is bad, it's just a little unexpected in a
sour way. It left me in a strange place. But this is one of those
independent films where the ending is very difficult to outline. It's
best to contemplate it on your own rather than have someone spell it
out for you.

Still, I think what really makes The Lie succeed is the overall idea of
the whole thing. We have a man who has told a wretched lie of an
incomprehensible nature, yet we still sympathize with him since we sort
of understand why he has said such a lie. We don't entirely get it, but
we vaguely know where he's coming from. If a film can make me side with
a character after such a wretched statement made by him/her, then it's
a very well written film.

The Lie is an ingenious, entertaining effort adapted from a short story
by T.C. Boyle. The script is managed efficiently, the directing, very
indie and very nicely conducted, and the acting from both Leonard and
Weixler worthy of recognition.

TagsUSA
Take Shelter
The Woman in the Fifth