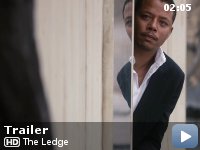 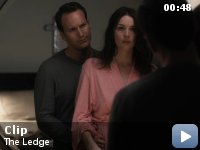 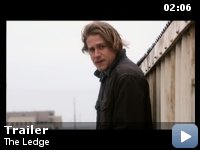 A police officer looks to talk down a young man lured by his lover's husband to the ledge of a high rise, where he has one hour to contemplate a fateful decision.

Storyline
A thriller in which a battle of philosophies between a fundamentalist Christian and an atheist escalates into a lethal battle of wills. Ultimately, as a test of faith, or lack of it, the believer forces the non-believer onto the ledge of a tall building. He then has one hour to make a choice between his own life and someone else's. Without faith in an afterlife, will he be capable of such a sacrifice?

Taglines:
One life. One chance. One step.

Stunning, intelligent thriller about the dangers of heart vs. head!


It's not hard to put together a monster film. You throw one insane guy
together with a hero, and add a car chase. The Ledge is nothing like
this, and that's why it's so impressive.

The main struggle is between a Christian with extreme beliefs, and an
Atheist who just wants out. Uniquely, it's the only film I can think of
that has an openly atheist hero and an A-list cast. And ironically, the
few people who have complained about this show exactly what the film is
trying to portray: that some people are so intolerant of atheism that
even one movie among the thousands in history is too much for them.

To me, the star of this film is Patrick Wilson, who plays the
fundamentalist. Instead of becoming a monster, his portrayal links
completely normal passions like love and protection and revenge that we
can all identify with, but then takes it to the natural conclusion,
egged on by his convictions that anything he decides to do must be
blessed.

Thus the central thesis of the film — that belief can go too far — is
played out on a small stage. This is a drama of just 6 people, but the
intricate explosions between them pull at the heartstrings far more
effectively than a car chase in an action film would. We hear so much
about the dangers of religion in big stories like 9-11, gay rights, and
abortion rights. Here is a film about the dangerous of religion in the
everyday, the dramas so commonplace that everyone who watches can find
something in their own lives to compare it with.

Sure, I've never walked out onto The Ledge. But something about the
masterful writing and acting in this film creates an authenticity that
is undeniable.

Go ahead. Rant against atheism. Show us how intolerant you are. Violent
words and deeds are the response of someone backed into a corner,
desperate not to lose it all, just like "Joe" is in this film.