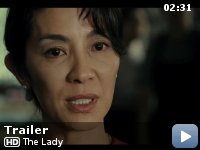 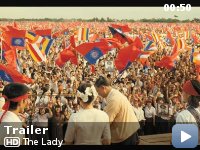 The story of Aung San Suu Kyi as she becomes the core of Burma's democracy movement, and her relationship with her husband, writer Michael Aris.

Storyline
THE LADY is an epic love story about how an extraordinary couple and family sacrifice their happiness at great human cost for a higher cause. This is the story of Aung San Suu Kyi and her husband, Michael Aris. Despite distance, long separations, and a dangerously hostile regime, their love endures until the very end. A story of devotion and human understanding set against a background of political turmoil which continues today. THE LADY also is the story of the peaceful quest of the woman who is at the core of Burma's democracy movement.

While the movie was being filmed – at least in Bangkok – the working title was "Dans la Lumiere" ("Into the Light").


This is one of the best films I have seen in a long time. It was highly
entertaining, emotionally evoking and educational. I had known very
little on the situation in Bhurma, and felt the summaries I read prior
to visiting the cinema to see this film did not do justice to this
cinematic gem. I came away from the screening determined to learn more
and do what small part I could to right the wrongs portrayed in The
Lady. The setting was wonderful, and I felt the cast played their parts
marvellously. Many write ups of the film have criticised the length,
however I do not think the story could have developed to give one a
reasonable overview of the situation with a shorter script. It would be
unnecessary to follow each of the characters' developments in the film,
particularly given the length of time in question.


I would recommend this film to anyone as essential viewing, whether or
not you have an interest in political affairs or not. The politics in
The Lady is so simply set out and self- explanatory that anyone would
understand the issues at hand.