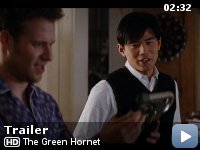 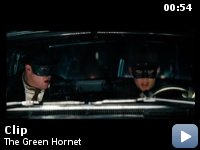 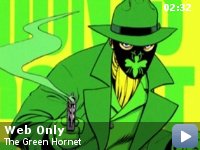 Following the death of his father, Britt Reid, heir to his father's large company, teams up with his late dad's assistant Kato to become a masked crime fighting team.

Storyline
Playboy Britt Reid (Seth Rogen) becomes the new publisher of Los Angeles' "The Daily Sentinel" after the sudden death of his father. Britt's party life is about to change when he and his driver and kung fu expert, Kato (Jay Chou), stop a robbery. With the help of Kato, Britt starts a new career of fighting crime as the masked superhero "The Green Hornet".

Taglines:
Protect the law by breaking it.

When Britt Reid and Kato first go out to vandalize the statue of Britt's father, their disguises closely resemble the costumes of the early incarnations of the Green Hornet and Kato of the 30s film serials.

Continuity:
In the scene where Kato and Britt are fighting in the pool house, Britt tumbles over the knight and knocks over the wooden weapon in his hand. The wooden weapon falls on the couch behind Kato. The camera changes from Kato to Britt and when it changes back to Kato, the weapon is gone.

Jack Reid:
[on the phone]
Tell the Mayor, I'm insulted. I would never jeopardize the journalistic integrity of this newspaper for some random Mayor's political agenda.

Young Britt:
But I was trying to stop some bullies…

It blows me away that people thought this movie was, "surprisingly
good." It's not. It's bad. Really really bad. Lets put it this way, I
have not walked out of a movie in who knows how long, since Ishtar? And
this was that bad.

Yes I did laugh a few times. But Seth Rogen, just plays himself as he
has played that same character in dozens of other movies, except this
time he has money, a side kick and weapons, devised by the sidekick. He
plays Britt Read as a super loud and obnoxious character without being
endearing. Reid's not smart or witty, but brash and annoying.

Now one could say that there are these great fight scenes thanks to
Kato (played by John Cho). But there so over the top special effects
laden as to be completely unreal and not enjoyable. It's like the
viewer is playing a video game when we see from Kato's perspective in a
fight.

The bad guy, has a bad guy insecurity complex with wanting to be
perceive as scary, but has a name that nobody can pronounce and of
course, owns and hide's out? at a cement/construction company.

In the end, this movie is tedious, predictable, annoying, and worse,
unenjoyably campy. Save yourself the money and god forbid the 17$ it
costs to see it in 3d. Because 3d does nothing but make you angrier you
spent that much more money on a waste of 2 hours.

TagsUSA
Nobody Else But You
Rabbit Hole