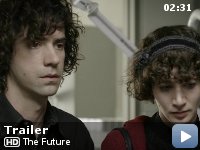 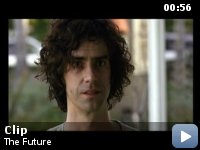 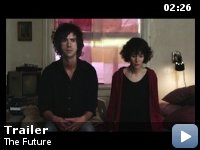 When a couple decides to adopt a stray cat their perspective on life changes radically, literally altering the course of time and space and testing their faith in each other and themselves.

Storyline
When a couple decides to adopt a stray cat their perspective on life changes radically, literally altering the course of time and space and testing their faith in each other and themselves.

Greetings again from the darkness. Thanks to her 2005 debut film ME AND
YOU AND EVERYONE WE KNOW, I became a fan of Miranda July. Unfortunately
that means reading a few of her short stories and waiting six years for
her second film. There is no rushing creative genius, and there is
certainly no obvious goal for capitalistic gains. With her second film,
it appears she will somehow generate even fewer viewers, despite being
a festival favorite.

The movie is bookended by the narration of Paw-Paw, an injured cat
waiting to be adopted by Sophie (Miranda July) and Jason (Hamish
Linklater). In the cat's voice we hear the hope of a new life – one
that includes love and security. Things aren't quite the same from the
perspective of our two heroes.

Sophie and Hamish are in many ways a typical couple. They sometimes
speak their own language and when things are going good, they believe
they can conquer all. However, hitting a bump means much doubt and and
an avalanche of self-defeatist attitudes. The latest bump is the belief
that adopting this cat will suck the freedom right out of their daily
lives … in fact, they discuss the fact that because of their age
(35), life and dreams are basically over. So, with 30 days til
adoption, they seek to live life to the fullest. You know, before it's
all over.

They both quit the jobs that have evidently been the burden keeping
them from greater purpose. Jason works from home as an IT Help Desk
agent and Sophie is the absolute worst dance instructor for kids in
existence. Jason tries to find meaning by selling trees to save the
environment. Sophie decides to make youtube videos – 30 Dances in 30
Days, but with such mounting pressure, ends up under the bed covers
before even one video is complete.

These two remind me of 8 year olds with advanced vocabularies. Somehow
they think society or the universe owes them something and just by
dreaming big, their lives will be complete. They each believe they have
special powers: Sophie can move things with her mind (not really) and
Jason can stop time (not sure). We see Jason fall under the spell of
the most interesting character in the film – an octogenarian played by
Joe Putterlik. We see Sophie fall into bed with Marshall (David
Warshofsky), a 50ish single dad living in the suburbs.

So here is some of what the film offers us: a slacker couple in a
rundown apartment, same couple overwhelmed by the burden of adopting a
cat, a crawling security blanket (t-shirt) that stalks its owner, a
narrating cat, an empty affair with a mis-matched couple, an old man
philosopher and his dirty-talk greeting cards, a discussion with the
moon (yes, the moon), a young girl (wonderful Isabella Acres) who
buries herself in the backyard with the approval of her dad, and
(twice) the terrific Peggy Lee song "Where or When".

Ms. July is a fabulous observer of life and people and personalities.
She seems to understand doubt, dreams and carries an interest in what
time lapse really means for us. Her manner of making these points and
sharing her insight is quite off-beat from what we typically see in
movies. I believe that makes it more important that she continue to
produce her works. Unlike what I will say about her character in this
film, The Future looks awfully bright for Miranda July.

TagsUSA
The Help
The Skin I Live In