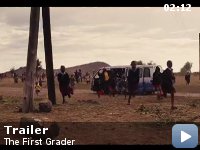 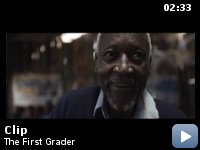 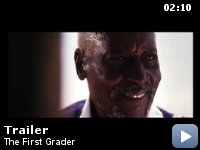 The true story of an 84 year-old Kenyan villager and ex Mau Mau freedom fighter who fights for his right to go to school for the first time to get the education he could never afford.

Storyline
Set in a mountain village in Kenya the film tells the remarkable true and uplifting story of a proud old Mau Mau veteran who is determined to seize his last chance to learn to read and write – and so ends up joining a class alongside six year-olds. Together he and his young teacher face fierce resistance, but ultimately they win through – and also find a new way of overcoming the burdens of the colonial past.

Taglines:
It's never too late to dream.

A fine film, but not a feel-good movie for kids


The First Grader (2010), directed by Justin Chadwick, is a serious and
important film that is being advertised as a feel-good movie, suitable
for kids. It's an excellent movie, but not for kids. The film is a
portrayal of the true story of Kimani N'gan'ga Maruge, an 84-year-old
Kenyan man who successfully enrolled in a first grade.

Maruge is a former Mau-Mau revolutionary and prisoner of war. He was
horribly tortured by the British army, but his spirit was never broken.
When the Kenyan government announces "free education for all," he
accepts this literally and tries to enroll in the first grade.

This neglect of former revolutionaries has occurred in many countries,
and, at least in the film, Kenya is no exception. As portrayed in the
movie, the Kenyan government officials aren't that different from the
British colonial officials, except for skin color. They're certainly
not enthusiastic about large numbers of adults following Maruge's
example and enrolling in school.

The film is overly simplistic at times. The behavior of the dedicated
teacher who accepts Maruge in her class is too good to be true, and the
other education officials are all "bad-guy" cardboard cutouts. A
subplot involving the teacher (Jane Obinchu) and her husband is
contrived and leads nowhere.

The torture scenes are horribly graphic and almost certainly realistic.
(See the entry about Kenya in Wikipedia for the terrible details.)
Those scenes make the movie completely unsuitable for children, in my
opinion.

The film is still worth seeing because it is based on a true event. Who
cannot be moved by an 84-year-old who is determined to read? In
addition, the acting by the two principals, Naomie Harris as the
teacher Jane Obinchu, and Oliver Litondo as Kimani Manuge are superb.

Although the film will work better on a large screen, it will
definitely be worth seeing on DVD as well. Seek it out–it's worth the
effort.