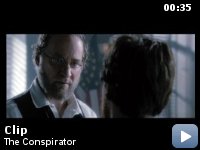 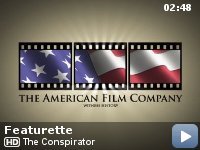 Mary Surratt is the lone female charged as a co-conspirator in the assassination trial of Abraham Lincoln. As the whole nation turns against her, she is forced to rely on her reluctant lawyer to uncover the truth and save her life.

Storyline
In the wake of Abraham Lincoln's assassination, seven men and one woman are arrested and charged with conspiring to kill the President, the Vice-President, and the Secretary of State. The lone woman charged, Mary Surratt, 42, owns a boarding house where John Wilkes Booth and others met and planned the simultaneous attacks. Against the ominous back-drop of post-Civil War Washington, newly-minted lawyer, Frederick Aiken, a 28-year-old Union war-hero, reluctantly agrees to defend Surratt before a military tribunal. As the trial unfolds, Aiken realizes his client may be innocent and that she is being used as bait and hostage in order to capture the only conspirator to have escaped a massive manhunt, her own son.

Taglines:
One bullet killed the President. But not one man.

The debut film from The American Film Company; their mission is to make historically accurate films about America's past.

Mary Surratt:
Have you ever believed in something far greater than yourself?


I had the pleasure of viewing this film at a press screening recently,
as well as hearing an interesting Q&A afterwords. I was very impressed
with this film.

I've read extensively about the topic of the Lincoln assassination, and
came into the theatre expecting another Hollywood style period piece,
one that minces facts and creates story lines where there are none. I
came out feeling very contented, and a little teary. This movie is very
well acted and truly conveys the emotion felt by the characters in
history, unlike some civil war films.

This movie truly is about the struggle between justice and country. I
won't give much away, but the emotional conflicts in this film are very
deep and strong. I was very surprised at James Mcavoy's handling of the
character, and more so his good American accent :D. Robin Wright and
other supporting cast are also superb. Do see this movie when it comes
out! It's a fantastic drama that will keep you at the edge of your
seat, mixed in with fantastic period details. Any fan of American
history and the civil war will enjoy this.