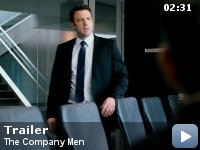 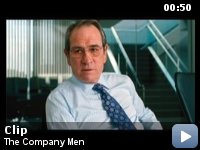 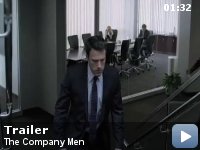 The story centers on a year in the life of three men trying to survive a round of corporate downsizing at a major company – and how that affects them, their families, and their communities.

Storyline
When the GTX Corporation must cut jobs to improve the company's balance sheet during the 2010 recession, thousands of employees will take the hit, like Bobby Walker (Ben Affleck). Bobby learns the real life consequences of not having a job. Not only does he see a change to his family lifestyle, and the loss of his home, but also his feelings of self-worth.

Taglines:
In America, We Give Our Lives To Our Jobs. It's Time To Take Them Back

Continuity:
When Jim comes to Gene with a "peace offering" of Glenfiddich single malt, he pours himself a glass and places the bottle on the mantle with the back label facing out. The camera cuts to Gene, and when it cuts back to Jim, the bottle has been turned so the front label faces out.

Phil Woodward:
You know the worst part?
[a beat]

Phil Woodward:
The world didn't stop. The newspaper still came every morning, the automatic sprinklers went off at six. Jerry next door still washed his car every Sunday.
[then]

Phil Woodward:
My life ended and nobody noticed.


There is something compelling yet mildly offensive about The Company
Men. Set during the American economic collapse of 2008, it dwells on
the human impact of corporate downsizing (a painful euphemism that pops
up regularly during the film) on a fictional shipping company. Dozens
of executives are ushered into unemployment as the company's owner, Jim
Salinger (Craig T. Nelson) wriggles and cost-cuts to boost the flagging
share price. Salinger reels off staff redundancy numbers in thousands,
leaving his lawyers to decide who stays and who goes. There is a voice
of conscience in all this (Gene McClary, played by Tommy Lee Jones) but
it is ineffectual. Most of those to fall under the axe are, of course,
blue-collar workers – but The Company Men boldly decides to show us the
other side of the coin. The victims here live in wealthy
neighbourhoods, drive Porsches, buy Hepplewhite furniture and borrow
the company jet to ski in Aspen.


Bobby Walker (Ben Affleck) is the lead victim, a sales executive once
on $120,000 a year plus bonuses and stock incentives. Cocksure and in
denial of his situation, Bobby expects to walk into another job within
days. But as we are shown by montages of long interview queues and full
'career centres', he's far from alone. Before long Bobby is collecting
his last redundancy payment and waving ta-ta to the sports car, the
golf club membership and even the family house. His wife goes back to
work but this isn't enough to salvage much of their old life. The core
of this movie is how Bobby struggles to recognise and adjust to his new
circumstances. It's a painful reality but an easy one to empathise
with, since most of us have been there ourselves.

This is where The Company Men becomes morally dubious. Bobby Walker
loses more than the thousands of blue-collar workers who have shared
his fate, yet he is undeniably still better off then they are. We see
and hear little of their fate in this whole farrago. It is tenuously
represented in the sarcasm of Bobby's brother-in-law Jack (Kevin
Costner), who is a much underused character. Jack correctly thinks
Bobby is an arrogant suit too concerned with wealth and
ladder-climbing; he needles him about corporate America's
irresponsibility and disregard for ordinary people. Yet it is Jack who
offers Bobby a job with his construction firm, which he reluctantly
accepts. To its credit, The Company Men doesn't fall for the trap of
having them become best buddies. What it could have used is some more
insight into the more profound effects that 'downsizing' has on
blue-collar workers.

The Company Men is well written and skilfully directed. Affleck is in
fine form, able to portray the subtle change from denial to desperation
and then to despair. The material didn't stretch the rest of the cast
(plenty of sighs and forlorn looks) but they nevertheless handled it
with aplomb.

TagsUSA
Nothing to Declare
The Mechanic