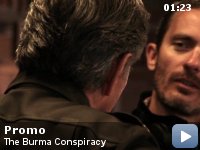 Largo Winch, the newly appointed CEO of the W Group, is accused of crimes against humanity on the very day he announces his intention to sell his corporation and use the proceeds to create a humanitarian foundation.

Storyline
Propelled to the head of the W Group after the death of his adoptive father, Largo Winch decides, to everyone's surprise, to sell it, and use the proceeds to create an ambitious humanitarian foundation. But on the very same day, he finds himself accused of crimes against humanity by a mysterious witness. To prove his innocence, Largo will have to retrace the steps of his past life, in the heart of the Burmese jungle…

12 Mercedes MLs and 3 Audi A6s were used (and wrecked) for the car chase.

Errors made by characters (possibly deliberate errors by the filmmakers):
Malunaï says after half of the film she even doesn't know his last name. Strange, as when Largo was interrogated in her presence, he was clearly called mister Winch.

Hollywood Reporter delivered an unfair bashing of this exciting sequel


Having watched the first Largo Winch movie just a few days earlier, I
was excited to view the sequel and it definitely delivered on many
levels. The acting by Tomer Sisley as the unwilling billionaire heir
Largo Winch is by far stronger than in the original movie, and the
other main characters such as the Burman villager Malunai and Alexandre
Jung (played by the now late Laurent Terzieff) contributed to the
storyline in an endearing and believable way.

The Burma Conspiracy contains most of the elements of a great action
movie. Strong acting, colourful characters and as an extra bonus we're
also introduced to a comical Eastern European villain. The have upped
the pace significantly relative to the first Largo Winch flick, and
added a few fairly violent action scenes but nothing that detracts the
attention from the main plot in a negative way. The movie takes the
viewer on a tour of some exciting locations such as Thailand, Burma,
Hong Kong and Switzerland and the scenery is indeed eye-catching even
for the most seasoned traveller.

Hollywood Reporter gave this movie an unfair bashing in their recent
review. For any honest fan of action movies, The Burma Conspiracy is
certainly one not to be missed and most definitely places itself in the
upper echelons of releases in this genre to have hit the cinema in the
last few years. It is indeed quite a shame that cinema distribution
outside the Francophone countries has been fairly limited.

Just Go with It
Now & Later