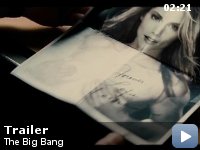 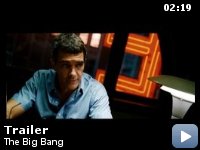 A private detective is hired to find a missing stripper. A simple job turns complicated when everyone he questions ends up dead.

Storyline
A private detective is hired to find a missing stripper but the job turns complicated when everyone he questions ends up dead. From the mean streets of Los Angeles to the desolate desert of New Mexico, Cruz must contend with a brutal Russian Boxer, three brash LAPD detectives, an aged billionaire looking for the Big Bang, and the billionaire's stunningly gorgeous wife. The solution to the mystery will cost ten lives, net $30 million and just might explain – well – everything.

Taglines:
Their search for the ultimate missing person.

There are numerous subtle references to physics concepts including: the movie studio is called "Shrodinger's", the café is called "Planck's Constant Cafe", and the computer password Delta x Delta p is the formula for the Heisenberg Uncertainly Principle.

Simon Kestral:
Dr. Niels Geck. PhD at MIT, age 13. Rogue scholar, age 16. Professor of Departement of Theoretical Physics, University of Geneva, age 20. Chief Physicist at the San Celeritas particle Collider. He's blessed with a neurological disorder. He sees words and numbers as shapes and colors. It's called synesthesia. It's like being born on acid. So he has very rich inner life. I envy him above all others.


I'm not quite sure how to rate this movie. It's very well made, with
excellent (if somewhat typecast) acting from all involved. The
direction shows a real sense of style, making bold use of color, hue,
saturation, surreal environments, and dream-like sequences… yet all
of these seem directly lifted from a David Lynch movie. Indeed, the
director has even produced a Lynch movie (Mulholland Drive). The dreamy
yet rocking score from Johnny Marr really gives life to the movie, yet
constantly sounds like lost tracks from Achtung Baby, the U2 album. And
then there's the story. I love the story, but I loved it even better
when it was a Wim Wenders movie called Until the End of the World.

This movie is pure plagiarism, right down to the soundtrack (Johnny
Marr, what happened?!), but it's excellently made. As an unauthorized
and uncredited American remake of Wim Wenders' awesome 1991 movie,
there's both a lot to love and a lot to hate.

Someone should be facing a lengthy legal battle right now, and it's a
shame, because this movie is so well done. Maybe next time the director
will find his own vision, instead of plagiarizing his idols.