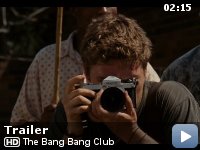 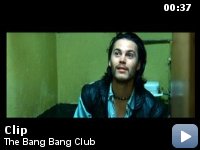 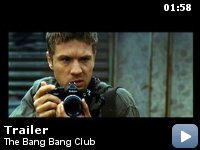 A drama based on the true-life experiences of four combat photographers capturing the final days of apartheid in South Africa.

Storyline
A drama based on the true-life experiences of four combat photographers capturing the final days of apartheid in South Africa.

Taglines:
Sometimes you get too close

Kevin Carter:
They're right. All those people who say it's our job to just sit and watch people die. They're right.

The Book is Brilliant, The Film is even Superior


THE BANG BANG CLUB, A MOVIE TIE-IN is as fine an introduction to the
quality of the film just released, a film based on this book. The
political history surrounding South Africa into which the four
photographer journalists involve themselves is confusing at best and
should be required reading before the audience steps into the grim
realities of the cinematic format. Another aspect that makes both the
book and the film of utmost importance is this past week's report of
the deaths of two brilliant photographer journalists Tim Hetherington
and Chris Hondros in a very similar situation in Libya.


South African writer/director Steven Silver adapted this book by Greg
Marinovich and João Silva for the screen and using some of the images
from the original book and enhanced by reenactment of the horrors by
cinematographer Miroslaw Baszak has successfully preserved all of the
brutality and gore of the situation in South Africa in 1994 – before
the country was joined into a nation by Nelson Mandela. Greg Marinovich
(Ryan Phillippe) is a free lance photographer in and around Soweto and
follows his instincts for a good story by wandering into dangerous
territory. He meets the three photographers who produce footage for
Star picture editor Robin Comley (Malin Akerman) whose crew consists of
pothead Kevin Carter (Taylor Kitsch, in a fine, sensitive performance),
Ken Oosterbroek (Frank Rautenbach, a very promising young actor), and
João Silva (Neels Van Jaarsveld). After proving his worth with a
Pulitzer prize photograph of a burning man the four young men bond
closely as the Bang Bang Gang and proceed to capture all of the
fighting and incomparably cruel hostilities as the three fighting
forces in the struggle for power in South Africa create the chaos of
1994. In a particularly touching scene Kevin photographs a starving
child being stalked by a hungry vulture and his photograph wins a
second Pulitzer Prize for the group. But war is war and takes is mental
and physical tolls on the Bang Bang Gang and only two survive to write
the book whose journal like content provides the story for the film.

This is a difficult book to read and the resulting cinematic version is
equally as difficult to watch. The cast of characters is excellent down
to the smallest cameo appearances by the South African people
describing the atrocities that till their existence. An excellent book
has been transformed in to an excellent film, albeit a film that is
harrowing to watch unfold.