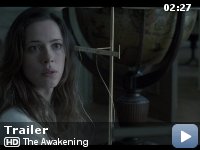 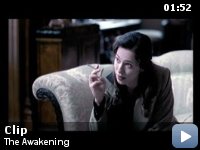 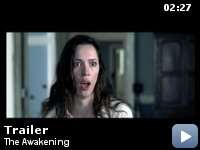 1921 England is overwhelmed by the loss and grief of World War I. Hoax exposer Florence Cathcart visits a boarding school to explain sightings of a child ghost. Everything she knew in unravels as the 'missing' begin to show themselves.

Storyline
1921 England is overwhelmed by the loss and grief of World War I. Hoax exposer Florence Cathcart visits a boarding school to explain sightings of a child ghost. Everything she knew in unravels as the 'missing' begin to show themselves.

Anachronisms:
Early in the film, which is set in 1921, Dominic West refers to the school in "Cumbria". He should have said "Cumberland", which is what the county was called before 1974.

A ghost story for grown-ups


Between 1914 and 1919, one million people lost their lives to
influenza. Society was more ignorant back then. Science and rational
thinking were not then the forces they are today; people were open to
anything, including the possibility of ghosts.

Florence Cathcart (Rebecca Hall) stands out in the London of the
twenties for being a free-thinker and a debunker of the supernatural. A
boarding school teacher (Dominic West) implores her to visit his school
following the death of a pupil, where unexplained sightings are being
reported.

Florence isn't a total sceptic. She leaves some room for belief, which
caused me to note she is agnostic towards ghosts. Essentially, there
are two stories. One is concerning the death of the pupil. The other is
more interesting and distinguishes it from a deluge of other horror
films which have vanished from my mind as quickly as the ghostly
apparitions in them. It focuses on Florence herself, and I shall say no
more as I will not spoil it for you.

This is not a scary film; there are several portents but few frights.
What there is plenty of, however, is suspense. Nick Murphy, in his
feature-length debut, also manages to sustain a melancholy mood,
crucial for his story.

It's no surprise that Rebecca is the daughter of Peter Hall, founder of
the Royal Shakespeare Company. She commands the screen in a way which
would cause many of her peers to blush with envy. Her character is a
difficult one to personify.

Dominic West, he with the simian countenance from the groundbreaking
crime series 'The Wire', is very good as the guilt-ridden soldier-
turned-teacher. Imelda Staunton is effective as the school matron. She
has that look in her eye which is trying to tell us something.

I'm calling this a grown-up film because the spiritual element becomes
auxiliary. Guilt and loneliness take over as leading themes. Murphy has
the acuity to drop the ghost story – because otherwise it would be a
simulacrum of other period chillers – and focuses on a story of locked
emotion.

The denouement is clever and original. The penultimate revelation would
have been a superb ending on its own, so having a double-twist is all
the more impressive.

TagsEngland Scotland UK
Take Shelter
The Woman in the Fifth