The Art of Getting By 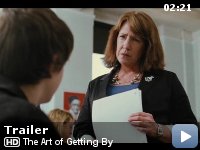 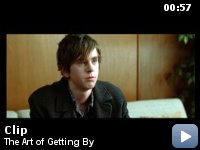 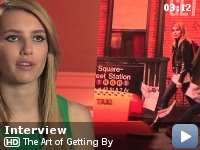 George, a lonely and fatalistic teen who's made it all the way to his senior year without ever having done a real day of work, is befriended by Sally, a popular but complicated girl who recognizes in him a kindred spirit.

Storyline
Believing the quote that you are born alone, die alone and everything else is an illusion, George doesn't see the point of life, school, or homework. Then he meets Sally and he now has a reason to go to school and make friends, even if he's not ready to admit to himself or to her that he likes her. The school's principal and art teacher introduce him to an alumni, and successful artist, Dustin, who can help guide George along life's path, but other distractions start surfacing, and George might not even be able to graduate from high school.

Taglines:
The toughest lesson is love.

In the first scene, the camera passes by Tom's Restaurant, the same restaurant featured in
Seinfeld, aka Monk's.

Dustin:
You and George should be together, Sally.

Dustin:
There's no such thing.


So I happened to notice quite a great deal of people hold negative
opinions on this movie. That's why I wanted to share my 2 cents.

Basically, the movie was what I expected it to be. Meaning: no
blockbuster, no real Hollywood production, no mind-blowing action. A
movie with a slice of life, just like 500 Days of Summer (come to think
of it, it gets close to it in some ways, even if perhaps a little less
mature). If you're looking for these exact characteristics, you may be
better of looking for a different movie.

So what to expect from it? First of all: it does not aim towards
shocking you. It delivers a message, apparent from the introduction we
get at the start of the movie. Starting a movie with a quote is bold,
yet it's also original and different. It sets the tone perfectly. So
George is this high-school guy who has a different hobby, drawing. He
gets so worked up in it that when he does, he loses sight of all his
surroundings (anyone who's creative will relate, as do I). On top of
this he holds a pessimistic view on life, basically saying 'we're all
going to die anyway so what's the point'? Now I know a lot of people
will consider this to be 'emo' or whatever, but it's not. Honestly. I
plead guilty: I myself often think in this manner. In fact, I can
relate so much to George that by the end of the movie, I sat with my
mouth open, totally freaked out and overwhelmed, still am. He's the
different one, the outcast, the guy nobody knows and everyone ignores.
Yet people tend to forget that being quiet doesn't equal being an
uninteresting person. On the contrary: this movie likes to show us the
other side of the coin. So my conclusion would be that if you often
feel misunderstood, or have lost motivation for life in general, this
movie would definitely be the way to go, as it requires a certain
mindset I believe…

What is so interesting about the movie, is that we see a great deal of
changes in George's life from the moment he meets Sally. It triggers
different actions and revelations in his life that are irreversible, as
is often the case with love in real life too. It basically shows us
that loved ones can change one's life for the better, even in a not
always positive way. Love surpasses most joys of life, as it surpasses
most of its burdens.

There were times when I was slightly annoyed. I was aware there were
times where I would tell myself 'just do it/just say it!'. There are
many awkward silences in the movie, which are automatically transferred
to the watcher's feelings. I wanted to jump into the movie, help G.
out, because life can be difficult, more so when you're an introvert.
And even more so when love's involved. (personal rant ahead) The world
of today is all about extroverts, people who are eloquent and sociable,
certainly not something George can boast about.

The amount of growth George shows while struggling with his problems
really makes the movie. You see him get out of his shell, while not
losing his edge. It's not your typical American movie with happy
ending, all's well that ends well. Again, just like life is a lot of
the time.

I'd advise anyone to have a look. This movie has been a hidden gem for
me and it perfectly fits my taste for movies. Be prepared for some
thinking and awkwardness from time to time and when that's OK with you,
you'll love it. If this is not what appeals to you, then it will
probably not be your cup of tea. If you are an artist and have lost
motivation and/or inspiration, you should feel compelled to absorb what
this movie has to offer.

If you do enjoy this movie, don't forget to take a look at: '500 days
of Summer' and 'It's kind of a funny story', which both are pretty
close in terms of atmosphere to this one.