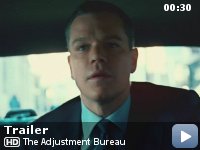 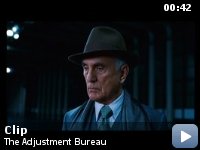 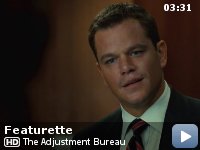 The affair between a politician and a ballerina is affected by mysterious forces keeping the lovers apart.

Storyline
Do we control our destiny, or do unseen forces manipulate us? A man glimpses the future Fate has planned for him and realizes he wants something else. To get it, he must pursue across, under and through the streets of modern-day New York the only woman he's ever loved. On the brink of winning a seat in the U.S. Senate, ambitious politician David Norris (Damon) meets beautiful contemporary ballet dancer Elise Sellas (Emily Blunt) – a woman like none he's ever known. But just as he realizes he's falling for her, mysterious men conspire to keep the two apart. David learns he is up against the agents of Fate itself – the men of The Adjustment Bureau – who will do everything in their considerable power to prevent David and Elise from being together. In the face of overwhelming odds, he must either let her go and accept a predetermined path…or risk everything to defy Fate and be with her.

Taglines:
Your World Has Been Adjusted

Early in the film, when David delivers an address at Fordham University, he is standing on the "Terrace of the Presidents", which is inscribed with the names of heads of state who have received degrees or honorary degrees from the university.

Factual errors:
Elise's marriage license application is issued by the Department of Human Services. In reality it would be issued by the City Clerk's office.

Podium Announcer:
Let's welcome my favorite alumnus, and the next Senator from the State of New York, David Norris.

David Norris:
[to crowd]
Thank you! Thank you! Well hi there. My name David Norris, and I'd like to be the next Senator from the State of New York.

Podium Announcer:
[to baby]
Hey there, what's your name?

We loved it! Imaginative, Romantic, Intriguing


I was invited to a free screening with a big group of friends in
Atlanta. I thought it might be right up my alley and it definitely WAS.
It's similar to "Inception" (one of my very favorites), but simpler.

This fantasy-suspense-action-love story is very intriguing and
ROMANTIC. I don't think any of us have seen Matt Damon be this
passionate about a woman in film before. THIS is the very best Matt
Damon I've ever seen — he is at his most charming, lovable, and most
moving here. And that's coming from a big fan of the Bourne Identity
films, The Departed, The Talented Mr. Ripley, Rounders, and many other
Damon films.

The Adjustment Bureau has a great supporting cast. Emily Blunt was
delightful and mysterious….. There were quite a few laughs as well as
some gasps from our audience (a packed house, too.) Most importantly,
the STORY is intriguing. Yes, that's what makes the film unforgettable
is simply the story. It's imaginative and very well-written.

It's a family-friendly film as best I remember –maybe PG-13 because of
some almost-nudity; but no swearing, no gore, no bad scares, and no
drugs or alcohol. It's all suspense, charm, intrigue, action, and
romance!

If you are not a fan of The Matrix, Inception, Moon, Memento, or other
fantasy type mind-benders, then you may not enjoy this film. We loved
it though. We heard rave reviews from other audience members afterward,
too.