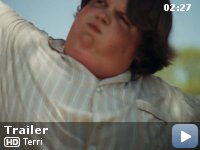 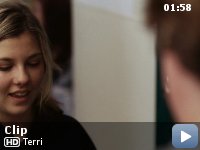 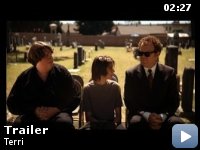 Centers on a large 15-year-old boy in a small town as he struggles to adjust to his difficult life.

Storyline
Centers on a large 15-year-old boy in a small town as he struggles to adjust to his difficult life.

Taglines:
We've all been there.

Mr. Fitzgerald:
I knew this kid growing up who tied flaming tennis balls to cats' tails and loved every minute of it. I think he's a cop now.


Greetings again from the darkness. Indie films are at a disadvantage on
many fronts, not the least of which is budget. That usually limits the
indie scene to personal, poignant stories of relationships and
self-discovery. Quirky, yet believable characters are often the
difference between ho-hum and worth-seeing. Writer Patrick Dewitt and
Director Azazel Jacobs definitely provide some curious characters of
interest.


Jacob Wysocki portrays Terri, an overweight outcast who is often
humiliated and bullied at high school. Terri seems to have given up on
ever fitting in. The proof is in the pajamas that he has begun wearing
to class every day. But as usual with "troubled" teens, there is more
to the story. We see his home life which consists of constant care for
his Uncle James (Creed Bratton from The Office), who is apparently
suffering from dementia. We get no backstory on the missing parents,
but it's clear that Terri's responsibility at home outweigh his
concerns for a missing social life at school.

Enter Assistant Principal, Mr. Fitgerald. Played by John C Riley, Mr.
Fitzgerald takes a special interest in the 'monsters and misfits'. The
reason is pretty obvious … he was one himself. His goal, even his
life's calling, is to encourage these kids to understand that life gets
better and that NO ONE really has it figured out. We are just doing the
best we can.

Terri's world collides with a couple other students. Chad (Bridger
Sadina) is so angry at the world that he pulls his hair right out from
his scalp – and is quick with a cutting line, though he clearly just
seeks attention. Heather (Olivia Crociacchia) is saved from expulsion
after a very generous move by Terri. Her world of popularity comes
crashing down, but Terri is the presence that gets her through.
Watching these characters interact with Mr. Fitzgerald emphasizes how
much we all need someone to care … someone to believe in us.

The film moves at a realistic to life pace. That means it is very slow
compared to most movies. The characters are allowed to develop, as are
most of the scenes. Jacob Wysocki's performance can be compared to
Gabourey Sidibe in "Precious". They are large youngsters who don't use
their size to comedic effect. Instead, they both display humanity and
real emotions in a less than perfect world.

Certainly not a movie for everyone, but if you enjoy intimate stories
about people just trying to get through life … no special effects,
explosions or asinine punchlines … then Terri is worth a look.