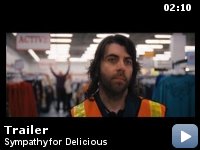 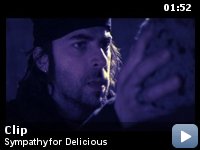 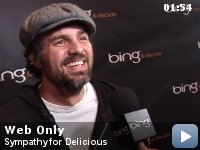 A newly paralyzed DJ gets more than he bargained for when he seeks out the world of faith healing.

Storyline
Dean O'Dwyer, also known as ""Delicious D," is an up-and-coming DJ on the underground music scene in Los Angeles. When a motorcycle accident leaves Dean paralyzed, he abandons his turntables for a wheelchair as his once promising career disappears before his eyes. Forced to live out of his car on skid row, Dean begins his descent into depression when he meets Father Joe Roselli, a passionate young priest. Father Joe introduces Dean to the world of faith-healing, an unlikely way for him to begin his quest to walk again. He soon discovers that he possesses the otherworldly power to heal people, but in an odd twist of fate, he is utterly unable to heal himself. Despite Father Joe's warnings, Dean angrily decides to use his newfound gift for fame and fortune. He joins a rock band led by charismatic front man The Stain with bassist Ariel, and manager Nina Hogue. But his newfound notoriety is unable to cure the hurt that encompasses his life…

Taglines:
You get what you need.


I was able to attend the premier at Sundance this year, and let me
begin by saying, this movie riveted my senses. With strong performances
by the cast, especially writer and star Christopher Thornton, the movie
worked it's magic. I sat in awe near the front row, as Mark Ruffalo,
the director, got on stage before the film began and gave a brilliant
opening speech. Then the room grew dark and the movie started.

I'm writing this from the New Frontier located on main street, Park
City. Two hours after the film ended, and yet i still find it hard to
clear my mind of "Sympathy for Delicious." After the film finished and
the audience gave a standing ovation, Mark, Christopher, and a large
portion of the crew, climbed on stage to answer our questions.

Among the many questions answered, was the story of how it all began.
Mark began by saying how he had been best friends with Christopher for
the past twenty years, how they had studied together as actors in New
York, and about Christopher's tragic accident seventeen years ago that
rendered him a cripple. Then Christopher took the mike and told us of
Mark's pressuring him into writing a movie based on his own character
and experiences. This began a ten year trek to getting the film made.
The numerous rewrites and financial difficulties it went through were
astounding, yet they persevered and finally succeeded in making a
masterpiece.

If you haven't yet viewed this movie you're missing out on something
great. Not only does it supply emotionally gripping characters but also
a wholly original script. And let's not forget Mark's directing, which
in itself is a powerful debut.

TagsUSA
Legend of the Millennium Dragon
Megan Is Missing