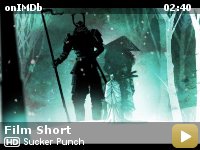 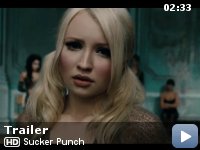 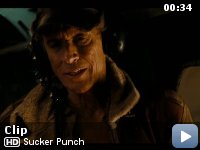 A young girl is institutionalized by her abusive stepfather. Retreating to an alternative reality as a coping strategy, she envisions a plan which will help her escape from the mental facility.

Storyline
A young girl (Baby Doll) is locked away in a mental asylum by her abusive stepfather where she will undergo a lobotomy in five days' time. Faced with unimaginable odds, she retreats to a fantastical world in her imagination where she and four other female inmates at the asylum, plot to escape the facility. The lines between reality and fantasy blur as Baby Doll and her four companions, as well as a mysterious guide, fight to retrieve the five items they need that will allow them to break free from their captors before it's too late…

Taglines:
You Will Be Unprepared.

Despite playing the lead character, Emily Browning does not have a line of dialogue until about 20 minutes into the film.

Continuity:
In the dressing room, when Baby Doll lists the four objects the girls must obtain to escape, she writes all four object in cursive, focusing on the last word "KEY". However, when the camera angle changes during the following conversation the list changes handwriting and the words change from cursive to "block letter". It continues to switch back and forth every time the camera angle changes during the conversation.

Sweet Pea:
Who honors those we love with the very life we live? Who sends monsters to kill us, and at the same time sings that we'll never die? Who teaches us what's real, and how to laugh at lies? Who decides why we live, and what we'll die to defend? Who chains us, and who holds the key to set us free? It's you. You have all the weapons you need. Now fight!

A love it or hate it type of film.


I personally enjoyed the film and I am a fan of Zack Snyder's previous
films (Watchmen,300,and Dawn of the Dead). The visuals were pretty much
stunning with very few exceptions, but they are easily forgiven and not
distracting at all. The acting wasn't anything "Oscar" worthy, but then
again it shouldn't be. The performances were very good for an action
film and I like it that way. This films definitely attracts the teenage
male demographics, who like action packed films filled with hot women.
This film, however is not for everyone. Some people might not like CGI,
some women might be offended that this film is very shallow, violent,
and very degrading towards women.This is definitely the type of movie
you'll either love or hate.


My only problem with the movie is that the story doesn't seem fully
realized… If you want to keep me interested you will need a lot more
than 20 minutes of fantasy CGI sequences sprinkled throughout a 120
minute trek However go in this movie expecting to have a lot of fun!
Overall the movie has stunning visuals, great action scenes, and
worthwhile acting. I definitely recommend this movie to people looking
to have a good time.