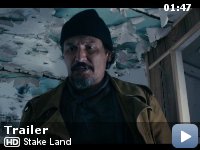 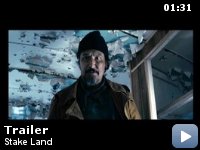 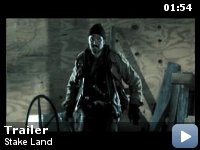 Storyline
Martin was a normal teenage boy before the country collapsed in an empty pit of economic and political disaster. A vampire epidemic has swept across what is left of the nation's abandoned towns and cities, and it's up to Mister, a death dealing, rogue vampire hunter, to get Martin safely north to Canada, the continent's New Eden.

Taglines:
The Most Dangerous Thing Is To Be Alive.

Continuity:
When Martin is being examined by the doc, Mister has a half full jug of beer sitting beside his foot. When they step outside the door, the jug is empty and Mister asks the barber sitting in the chair if they have any alcohol in town. The barber then tells him there's some "sour beer but it won't kill you" and Mister then walks off to fill his empty jug. The two scenes are out of order.

Martin:
I've seen things you wouldn't believe. Things a boy shouldn't see. I was like any other kid; I didn't believe in the boogeyman. Then the world woke up to a nightmare.

Real vampires are back in a another post-apocalyptic road movie


Synopsis: Orphaned Martin is taken under the wing of bad-ass Mister as
they travel across vampire-ravaged America in search of the refuge
known as 'New Eden'.

Aside from the fairly frequent jumps, scares and gore, Stake Land feels
surprisingly subdued for a recent horror film. With its melancholic
tone, ravaging of the religious right and focus on characters over
action, the film succeeds in being a bit more thoughtful than many of
its contemporaries. And don't go into this expecting sanitized,
pretty-boy vampires a-la-Twilight. These monsters are old school to the
core- more like zombies than modern takes on vampires; all ferocious
snarls and messed up faces. With fairly few jumps or scenes that are
likely to scare a grizzled horror fan, Stake Land is easier to
recommend for its realistic world-building, mournful soundtrack and
interesting, well-drawn characters.

Opening with Martin's voice-over as he introduces himself and his
traveling companion, the enigmatic father figure and teacher, Mister,
the film quickly flashes back to a vicious encounter between Martins
family and the horrific vampires. Sticking with most of the rules of
the vampire myth, it is soon established that stakes and sunlight are
still useful in this tale of vamp vs human conflict. The pace is
deliberately slow and the film painstakingly constructs a very
authentic feeling vision of post-apocalyptic America. Guarded
communities living in fear while supplies dwindle, drinking and
sleeping together in packed bars until the sun rises and religious
nutjobs taking over the wilderness to rape and murder as they please.
It is this rendering of the Christian crazies that strikes the biggest
false note in the story, feeling over-blown and too simple for the
subtleties of much of the rest of the story and character drawing.

The cast are great, particularly Nick Damici as Mister who delivers a
convincing performance with the familiar role of mean old git with a
soft heart underneath. Kelly McGillis is barely recognizable as a
constantly victimized nun (bet she must be wondering what happened to
the days of getting jiggy with Tom Cruise in a Navy uniform) and the
youngsters, especially Connor Paolo are good in their less demanding
roles. It's particularly nice to see Danielle Harris still working,
even if she has lost some of the spunk of her early appearance as Bruce
Willis' daughter way back in The Last Boy Scout.

Jim Mickle should be applauded for his direction; the film works very
well as a whole, with good performances from the cast, a bleak
soundtrack and pacing that could have easily been spoiled by trying to
appeal to a bigger audience. It is a brave movie; not overly rushed and
taking its time to build to its understated climax. The action and
horror are handled well and the villain is a right nasty piece of work
that should stick in the memory.

The film is most memorable for its details of life after the vampires
take over. The small communities that have popped up round the country
feel realistic and lived in. A sense of community, of something we have
lost to some extent in 2011 shines through and gives the film a
nostalgic feel, as if the vampire apocalypse may help America return to
a simpler, more caring time. The positioning of the cult of Christian
crazies dropping 'bombs' on peaceful communities and their obsession
with deliverance and the 'will of God' is the least subtle and most
forceful of themes on display and does feel a little OTT in places but
the journey of the characters and their encounters with ordinary folk
ground the film and make up for its excesses in other areas.

Stake Land is a very well made film and can be enjoyed as a simple
horror film but also as an experience of a post-apocalyptic society and
the highs and lows of living in a world with a drastically reduce
population.