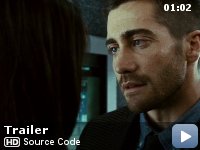 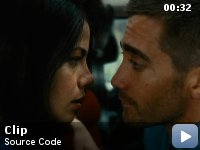 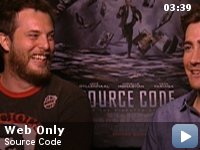 An action thriller centered on a soldier who wakes up in the body of an unknown man and discovers he's part of a mission to find the bomber of a Chicago commuter train.

Storyline
Colter Stevens, a US Army helicopter pilot whose last memory is flying in Afghanistan, wakes up on a commuter train. However, he discovers that he has assumed the identity of another man. 8 minutes later, the train explodes and Stevens finds himself in some kind of pod. He then talks to someone named Goodwin, who tells him he has to go back and find out who the bomber is. He is sent back to go through the whole thing again and attempts to find who the bomber is but fails. The bomb goes off and Stevens finds himself in the pod again. He is sent back another time, yet still cannot find out anything. When he returns, he asks what is going on. Goodwin and Rutledge, the scientist in charge, tell him that he is part of a project that can put someone in another person's consciousness during the last 8 minutes of their life. Stevens then asks why he cannot just stop the bomb. He is told that…

Topher Grace was considered for the lead role.

Christina Warren:
I took your advice. It was good advice, thank you.

Suspenseful thriller with a twist


I was very fortunate to be at the World Premiere at SXSW in Austin and
attended the Q&A after with James Duncan, Vera Farmiga, Michelle
Monaghan, Jake Gyllenhaal and Ben Ripley. The story line keeps you on
the edge of your seat and adds in enough humor to make it a thoroughly
enjoyable experience. There is amazing, subtle chemistry between Jake
and Michelle which really is the star of the film, performances by all
the actors are excellent. Beautiful cinematography that will make
Chicago proud. The ending brings up more questions than answers, but it
feels right, so that's OK with me. I am not a big sci-fi fan, but this
film delivers on romance, suspense, mystery and thrills. Highly
recommended.