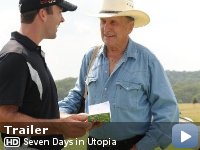 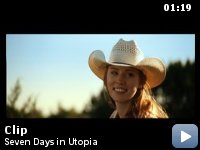 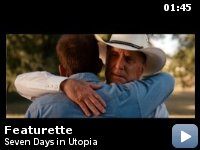 After a disastrous debut on the pro circuit, a young golfer finds himself unexpectedly stranded in Utopia, Texas and welcomed by an eccentric rancher.

Storyline
After a disastrous debut on the pro circuit, a young golfer finds himself unexpectedly stranded in Utopia, Texas and welcomed by an eccentric rancher.

Taglines:
Life is never the same once you've been to Utopia.

Though they shared no scenes in this film, co-stars Lucas Black and Robert Duvall both appeared in the Billy Bob Thornton film
Sling Blade.

Revealing mistakes:
The morning after a torrential rain near the end of the film, Luke is instructed to bury a box in a small hole dug into the earth. The dirt – whether recently dug or not – would have shown some moisture retained from the storm and would not have been the fine dusty powdered dirt in this scene following that size of a thunderstorm. The hole, too, would have shown some moisture absorbed into the earth.


Seven Days in Utopia tells the story of a man's failure and then his
struggle, and it's a familiar storyline, as old as the heroes of Greek
mythology.

I watched the movie with my wife, who knows nothing about golf, and my
two children, ten and seven. My wife enjoyed it most of all because it
was clean, meaning it had no profanity, and the romantic leads were not
rolling in bed ten minutes into the movie. The kids liked it too – it
was easy to follow, easy to understand, and had plenty of fun parts.

I recommend the movie because it is a pleasurable way to spend a little
time. It is not heavy handed in what little preaching it does, which I
know puts some people off. Even for those who are put off by Christian
movies, I can recommend that they see it and try to think about the
values espoused without dwelling on the source of those values.

I am always hesitant to reveal too much plot, but suffice to say the
movie touches on many subjects, one of which is small town life. I took
away the idea that our frenzied lives are not always good for us, and
especially if they deprive us of the time or the mood to reflect on and
renew our purpose and our convictions.

It is about golf, and the idea that the game is an individual game, one
player vs. the other, as much mental as physical. In the movie, the
main character needed to renew his convictions in order to fulfill his
purpose, which in his case was excellence at golf.

It is also about the struggle toward redemption, and the path shown in
the film is a surrender to God, letting Him take charge and letting go
all of the angst that burdens our failures, whether it's a missed golf
shoot or even alcoholism.

TagsUSA
Dos
Dawn of the Dragonslayer